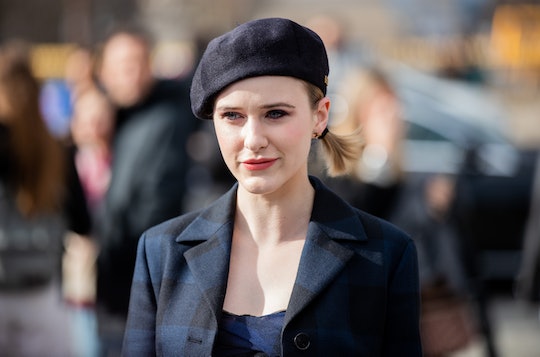 'The Marvelous Mrs. Maisel's Rachel Brosnahan Is A "Crazy Dog Mom" & Proud Of It

With The Marvelous Mrs. Maisel up for 20 Emmy nominations for the second time this year, fans of the show may be wanting to learn about more about the real-life actors that bring these hilarious characters to life. Playing Miriam "Midge" Maisel, a mom of two and stand-up comic on the hit show, Rachel Brosnahan doesn't have kids of her own, but that certainly hasn't stopped her from portraying a complicated woman who leaves a life of domesticity to carve out her own path.

Brosnahan has been married to actor Jason Ralph for several years now and the pair have been coupled up since they first met in 2015 while working on the WGN series Manhattan, according to Just Jared. They have kept their relationship pretty quiet, but Brosnahan did confirm their relationship to People during the 2019 SAG Awards. "We've been married for years and been together for even longer," she told the magazine. "We had a good laugh when the news came out that we had just got married, like 'Happy six-month anniversary, honey!'"

Speaking with Men's Journal, Brosnahan shared that she's comfortable both in a relationship and on her own, but seemed to suggest that she's better off with Ralph. "I think nobody needs somebody else to be their best self, but sometimes if you find the right person, they can complete you and lift you up and help you explore new parts of yourself that you didn’t know were there," she told the magazine.

And while the two don't have any human children yet, they do share some adorable pups.

In the same Men's Journal interview, she described herself as a "crazy dog mom," and the "fur children" can often be seen on her Instagram.

"I can hang with the craziest of the crazy dog ladies. They’re my fur children," she told Men's Journal. "Nikki is a pit mix, and she’s so gentle and sweet and needy. She just stares at you with these human eyeballs. Her well is very deep. Then Winston is my Shiba Inu, who is filled to the brim with ’tude. He was fiercely independent, more like a cat, but he’s getting cuddlier."

And though she may not be a mom to little people IRL, she does have an opinion of Midge's unique and often-criticized parenting style. When Twitter came for the character's absentee approach to raising children, Brosnahan responded to one Twitter user, saying, “I agree and I GET what the show/writer’s/etc. are trying to convey BUT it doesn’t change the fact that as a viewer we can’t sit and say to the tv ‘love her, but she’s a terrible mom!!’”

The actress replied to the tweet agreeing — to an extent. “Absolutely. I’m not sure I would go as far as terrible, however she’s certainly not winning ‘parent of the year.'" she tweeted. "But it also doesn’t change the fact that this was not one of the primary criticisms of Don Draper or Walter White who were similarly, single-mindedly ambitious.”

Whether or not children are in Brosnahan's future, an Emmy or two surely are. Tune in to see this Sunday on ABC, YouTube TV, and Hulu + Live TV from 8 p.m. to 11 p.m. ET.