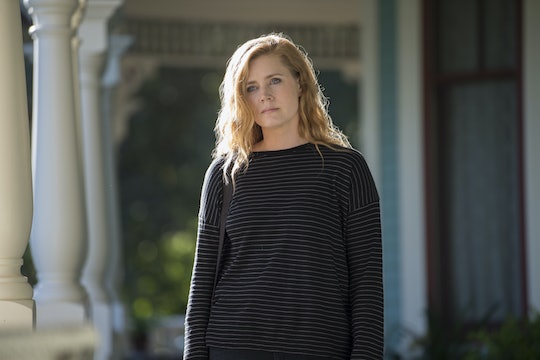 Still reeling from that shocker of an ending to Sharp Objects? Same. Since the final reveal was so abrupt, a lot of you are probably wondering right now if Sharp Objects ends the same way in the book as it does in the series. And while some things were cut in the screen version, the eight-episode series' finale progressed in a similar way as the last couple of chapters of the book.

Warning! Spoilers for the series finale of Sharp Objects ahead.

In the book as well as the show, Camille is poisoned by Adora until the police show up to help both her and Amma escape their mother. And just like in the series, Amma moves in with Camille to live in the big city and to start fresh, in a way. So in that regard, the show continued to follow the book pretty closely. And, importantly, in Sharp Objects the book, Camille does find out on her own that Amma is responsible for the murders of the young girls back in Wind Gap, even though Adora had already been arrested and convicted of the murders.

But how Sharp Objects ends, with its final, chilling scene, does differ from the book.

In the final scene of the series, Camille discovers that the floor tiles in Amma's dollhouse are made from human teeth. Which is... crafty. While she also discovers this in the book, the novel goes on to reveal more explicitly that Amma also murdered her new friend in the city and Camille, as the narrator, describes visiting her in a detention home afterward.

Throughout the eight episodes, Sharp Objects kept pretty close to the source material and didn't deviate too far from the story told in the book. And the finale episode felt like a combination of the book's last chapter and its epilogue, even if it didn't include all of the details that followed the big reveal that Amma is the killer.

In the finale, after Camille and Amma move back to St. Louis together, they’re at her editor’s house for dinner. He’s reading her article out loud and, for the most part, Camille’s article for the paper is word for word what Camille says as the narrator in the last chapter of the book. You can also see little clues that Amma has another side to her. When her friend, May, shows an interest in journalism and impresses Camille's editor, Amma calls her a "kiss-ass" and tries to divert the attention back to herself. Afterward, Camille watches May push the food around on her plate rather than eat, which makes me believe that Amma might not be the best friend to the girl when they’re alone. She did not, however, yet suspect that Amma was a cold-blooded murderer.

A couple of days later, May’s mom is worried because she hasn't seen her daughter lately. In the book, it’s revealed that Amma killed her, just as she’d killed the other girls back in Wind Gap. This is not confirmed in detail on the show, but only briefly in the post-credits scene which shows Amma actually killing her friends.

Sharp Objects author Gillian Flynn told Rolling Stone that the way it ended was the show’s director, Jean-Marc Vallée’s, choice. "It was his idea to have, right at the moment people are looking at each other to start theorizing about what happened, those quick shots of what exactly happened," Flynn said. "And then that last final shot of Amma as the Woman in White, if you stay long enough. I don’t know if you saw that part."

For the most part, Sharp Objects followed the book as closely as possible. The book goes a little deeper into the aftermath of not only Adora’s arrest, but Amma’s eventual arrest as well. But knowing what Camille knows now, I think everyone can assume that much.