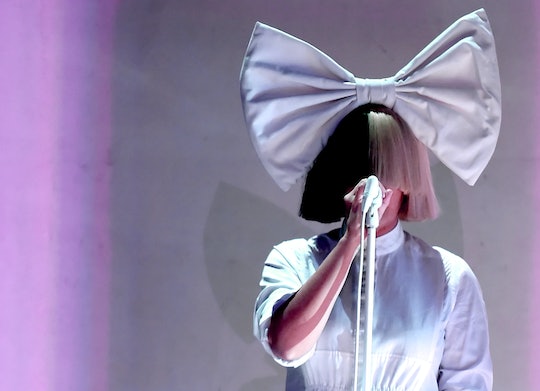 Although she's been notoriously private over the years about her personal life, Sia just revealed she "adopted a son" during a recent interview with GQ. The 44-year-old singer/songwriter didn't open up about any other details beyond that, but did reveal the news in the most casual way.

The singer recently sat down with GQ to discuss her career and her personal life — or more specifically her collaboration with the DJ Diplo. The Australian singer — who has been divorced from filmmaker Erik Lang since 2016, according to Rolling Stone — has a bit of real-life chemistry with Diplo and explained in the interview that she finds him "super-duper hot," even though she doesn't think they should have a relationship. Why? She has no time, especially now that she's adopted a son.

While speaking with GQ, the "Cheap Thrills" singer relayed a recent message she sent to Diplo that read: "This year I wrote him a text, and I said, 'Hey, listen, you're like one of five people that I'm sexually attracted to, and now that I've decided to be single for the rest of my life and I just adopted a son, I don't have time for a relationship. If you're interested in some no-strings sex, then hit me up.'"

Romper has reached out to Sia's rep for further comment on her news, but did not receive an immediate response.

Sia didn't say anything else about her big news, although she has hinted in the past that adoption might be something she would consider. Back in May, when HBO shared the documentary Foster, featuring teen rapper Dasani who was looking for a family, People reported at the time that Sia shared a since-deleted tweet offering to adopt him, saying: "Hey Dasani from 'FOSTER' on @HBO! I'd like to adopt you we're just trying to find you and get my house check done etc. but I want you to know you will have a home with me."

Sia's recent announcement that she adopted a son actually had some people on Twitter wondering if it could be Dasani. "@Sia congrats on your new son!" one fan tweeted at her on Tuesday. "thats wonderful. Is it dasani?"

While it's unlikely that Sia will share many or any other details about her adoption news, it sounds like life as a mom and a musician is keeping her plenty busy.