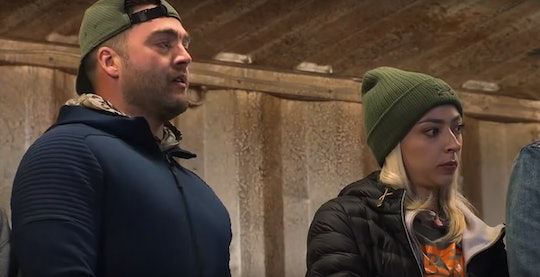 Someone May Quit 'The Challenge: War Of The Worlds' & Can You Really Blame Them?

The Challenge: War of the Worlds is just four episodes in and already there have been twists, surprise eliminations, and some epic shouting matches. The competitions have been pretty cool too, but let’s be honest — most of us are here for the drama more than anything. And what’s more dramatic than someone quitting? In the promo for next week it looks like someone leaves, but it’s unclear who quits The Challenge: War of the Worlds. It’s probably easy to want to throw in the towel and go back home where you aren't sweating in the desert every day and while no one is shouting at you while someone else has a camera in your face and boom mic hanging over your head. But since it’s so early in the game, the reason has to be pretty good for wanting to quit already.

There’s a chance that next week’s preview could just be a red herring and that someone only threatens to quit. But as it stands, there are a handful of people it could be. In the promo, it looks like Hunter is feeling defeated after a particularly grueling challenge. He says, "That’s bullsh-t" and throws a tire right before T.J. asks him if he’s quitting. If the challenge results seem unfair to Hunter, he could give up on the spot right there. Then again, I find it hard to believe that he’d be so willing to throw away his chance at $1 million. He already lost half of that to Ashley last season.

The promo also shows Zach talking trash about Amanda. He says that she is "a pathetic loser that has no life." I can't see her just sitting down and taking that, but at this point, her allies in the house are dwindling down. She’s barely clicked with her partner Josh, who has tried his hardest to stick up for her when needed. Amanda might decide that it’s not worth it to stay and fight without friends to back her up.

Bear could also be a potential quitter this season. He has proven himself to be a strong competitor and he is definitely out for blood when it comes to the returning vets. He looked quite pleased at the end of tonight’s episode when yet another Challenge vet was eliminated. But (and this is a big 'but'), he is starting to rub some of his fellow competitors the wrong way.

If someone does quit The Challenge this season, I would put my money on it being a rookie rather than a returning player. The vets have all done this before and they knew what they were getting themselves into. Some of them might also be in this to finally win some prize money if they’ve never walked home with any from The Challenge before. The rookie contestants, on the other hand, could start to feel overwhelmed by the competitiveness of the show overall. It’s probably a lot to handle coming into it virtually blind, even if some of them have competed in physical challenges on other reality shows.

I’m not sure who quits The Challenge or if someone just threatens to leave ahead of the elimination competition, but I doubt a vet would put him or herself in that position.