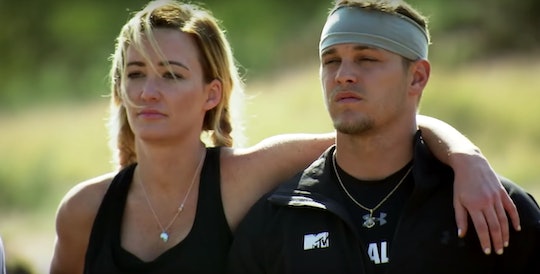 Ashley & Hunter On 'The Challenge' Have An Interesting History

This might not be the season of old rivals battling it out, but The Challenge: War of the Worlds has brought Hunter and Ashley back together under the same roof and with the same high stakes at hand. It was only natural that their former partnership on Final Reckoning last season would come up to reignite their mutual dislike for one another. Honestly, though, Ashley and Hunter’s past on The Challenge is pretty epic and despite whose side you’re on, they will go down as one of the most memorable teams in the show’s history.

When Ashley and Hunter were thrown together as teammates last season, they already had a past. They hooked up on Invasion of the Champions and had a brief fling that ended badly. Hunter called Ashley disposable and she said that she’d only used him to get further in the game. I’m not sure if that’s true or if she just wanted to hurt him at the time, but when they became partners on Final Reckoning, there was still some animosity.

By the middle of the Final Reckoning season, they were sick of each other. Despite being partners and winning competitions together, they fought with each other and generally couldn't stand to be around one another. And, to finish the season the only way possible, it ended when one of them took home all of what could have been shared prize money. Like I said — epic.

After the multi-part challenge meant to determine the winning team of the season, T.J. announced that Ashley had a faster time through the last leg of the competition than Hunter. This gave her the option of sharing the $1 million prize money with him or keeping it all for herself. It didn't take long for her to say that she was keeping the money. She said that throughout the season, Hunter "Belittled me, put me down, slut-shamed me, and threatened my life and my family’s life."

He told her, "You played me, you stupid f*cking bitch. You played me the whole entire season." They were both pretty awful to each other over the season. But while Hunter broke down crying, clips from the season played to prove that Hunter really did have word vomit when it came to Ashley. In one scene, he told some of the other guys, "All I'm saying is, if this stupid f*cking slut is gonna cost me half a million dollars, then I'm coming for her family."

Now, they are competing on the same show again. Only this time, Hunter and Ashley are on different teams and they have the chance to take each other down again. Fans who are Team Hunter could be ready to see Ashley fall, especially since she just won $1 million last season. On the other hand, he might have nudged her to that decision with his less than sportsman-like attitude as her teammate.

In a video posted on The Challenge Twitter page, Ashley admitted that she was nervous to be in the same house with Hunter after the way things ended last season. "I know how spiteful he can be," she said. "Hopefully he can get over it and hopefully he doesn't kill me in my sleep."

After Final Reckoning ended, Ashley spoke to For The Win about her decision and stood by her choice to take the money for herself as a sort of payback for the way Hunter treated her all season. "Halfway through the season, I hated Hunter so much," she said. "Everything he said was condescending and mean. When it came to game plans, I had to fight him to listen to me."

They might get the chance to battle it out on War of the Worlds, and if it all comes down to one of them taking home that prize money again, it’s sure to be amazing.