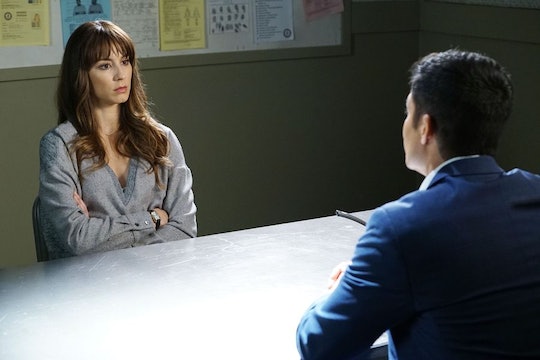 This Spencer Twin Theory Seems More Possible Than Ever

For possibly years now, Pretty Little Liars fans have been certain Spencer has a twin. With each passing episode this theory seems to become more and more plausible. Fans now know Spencer is actually Mary Drake's daughter and Mary Drake seems to have a number of kids running around Rosewood. But does Spencer really have a twin on Pretty Little Liars? Well, most fans seem to agree that the latest episode of PLL basically confirmed the twin theory.

At the end of the episode, Spencer was seen at the airport with Wren. The two appeared to be engaged in a pretty heated discussion before Spencer spotted Ezra waiting for his flight. She then introduced Ezra to Wren and chatted him up before Ezra decided to duck out of there. However, before letting him leave, Spencer asked Ezra not to tell anyone he saw her there. She claimed it was because Wren helped Charlotte get out of Radley and she didn't want Detective Fury finding out about her meeting with him, but it was all a bit sketchy.

What makes it more suspicious is the fact that just a bit earlier in the episode, Spencer got into a confrontation with Detective Fury, in which he basically accused her of killing Rollins/Dunhill. Spencer was clearly not having the best day, so it doesn't make sense that she'd decide to hang out with Wren, of all people, just to keep him company during his layover. Plus, she seemed in a really good mood — a better mood than we've seen Spencer in a long time.

Also, how did Spencer get there so quickly? Unless there's a new airport in Rosewood, she had to get all the way to Philadelphia to be at that airport with Wren. Of course, time is just a construct on PLL, but still. It seems a bit far-fetched that she was able to make it over there and then go home, take a shower, and find Mary Drake's note, all within such a short amount of time.

Reddit user summyg also pointed out how strange it was that this whole scene took place from Ezra's point of view. If this was really Spencer, why didn't it show what she and Wren were talking about? Why didn't they show Spencer getting a text from Wren after her meeting with Detective Fury and then going to the airport? Instead, the whole interaction was through Ezra's eyes.

Plus, as Cosmopolitan pointed out, the fact that Troian Bellisario, who plays Spencer, directed this episode seems noteworthy. If she was going to direct any episode, doesn't it make sense that she'd direct the one that basically confirms the twin theory?

Everything seems to point to the "Twincer" theory being legit. Thankfully, there's not too many episodes left before all the answers are finally revealed.