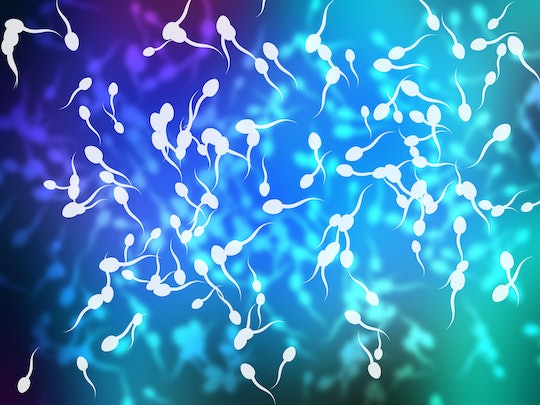 Turns Out, Sperm Has Some Extra Benefits

When you start looking up the benefits of sperm, the images that pop up on screen will likely stay with you for a while, so let's just clear this up OK? Your man's spunk is apparently the Swiss army knife of bodily secretions. You probably knew that it was beneficial in some way (obviously), but does sperm have any benefits for you other than producing its very own tiny interrupter of copulation? Apparently so.

Let's say right off the bat that I am reasonably certain that all of these studies were initiated in a room full of dudes. They sat around their conference table and pitched the study to more dudes, and they were like "We want to know; does sperm have any benefits that we can prove?" And apparently — they did. According to an article in Psychology Today, it is posited that the parts of semen absorbed by the vagina (note: not the sperm, that has a target) possibly elevate the moods of the women exposed to the semen, because of all the happy lady hormones that make up part of it. Mr. Happy apparently is just chock full of happiness that he's very willing, nay — designed — to give.

Sperm might also make you more fertile. According to the American Academy for the Advancement of Science, semen contains something called neural growth factor (NGF). In some species, this can trigger an ovulatory response, meaning, if an animal is given to spontaneous ovulation, like llamas, for example, the NGF in the seminal fluid produces that response. Scientists are currently studying how to harness the power of NGF for women struggling with fertility, and also studying the effects it may already be having between partners.

Also, when you're trying to get pregnant, sperm changes your immune system to help your body get pregnant and maintain that pregnancy according to New Scientist. The hormones and proteins in the seminal fluid react with your immune system, causing you to become just ever-so-slightly immunocompromised, which tells your body to stop fighting off the foreign invaders (sperm) with quite so much vigor, allowing your body to accept the sperm, allow it near the egg, and give it what it needs to find its home in your uterus.

When you are pregnant, sperm continues to have benefits. The first benefit is that it may help morning sickness, by, get this, swallowing it, according to scientists at the State University of New York. I know that when I was worshipping the porcelain god eight to 10 times per day while pregnant, the very first thought I had after brushing my teeth and placing a cold compress on my neck was, "I feel like going down on the man responsible for this." (I know I was also responsible, but when they're still eating lo mein and sushi while downing coffee, and you can't eat freaking matzo crackers, it's all their fault.) My second thought? "Man, I should totally swallow." Or not. Or I never dreamed to do this. Ever. But would I have tried it had I known? No. No I wouldn't.

The second benefit sperm has for pregnant women is potentially preventing preeclampsia, which is a pretty big deal. The trick is that preeclampsia is often caused by the genetic clashing of materials inside the woman, according to researchers in Denmark. Because of this, it's believed that repeated exposure to your man's genetic material allows you to build a resistance to his specific genetic markers, and lowers your risk for complications due to the big bang that happened in your uterus.

But, even though there has been much to-do about the benefits of the "facial" (yes, that kind of facial), there really isn't that much science behind it. Turns out, sperm has plenty of benefits, but only internally. (Hey-oh.) But hey, apparently women are shelling out the big bucks for whale sperm hair conditioner, so maybe you could combine your shower sex ritual with your leave-in routine and make everyone happy?

Or maybe stick with Herbal Essences because sandalwood smells better than semen. (My husband is definitely going to print out this article and hang it in our bathroom, I can just tell.)