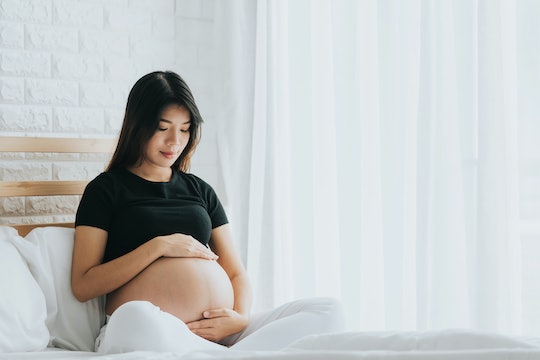 The first thing everyone asked me when they found out I was pregnant was, “Do you know what you’re having?” Good or bad, it was definitely on everyone’s mind. My husband and I wanted to find out what we were having ASAP, so we could stop calling the baby an “it” and call him or her by their name. According to pregnancy message boards, there are quite a few other families who couldn’t wait either and resorted to home gender prediction tests before that anatomy scan ultrasound, like peeing on baking soda. But does the baking soda gender test work?

You know the saying if it seems too good to be true, it probably is? I live by this rule, and while I never tried it, at the time, I wanted to know from a scientific standpoint if this “trick” had any merit whatsoever — and if it did, I’d be buying some baking soda. If you haven’t heard, this “test” requires you to take baking soda and mix it with your urine. If it fizzes, you’re having a boy. If it doesn’t fizz, then you’re having a girl. Seems simple enough right?

Like I thought, it turns out it doesn’t actually work. Dr. Jamil Abdur-Rahman, an OB-GYN and medical travel blogger along with his twin brother for TwinDoctorsTV, explains the mechanics to me in an email interview for Romper and I happily received a mini science lesson. He says baking soda is “sodium bicarbonate,” which is a basic substance. Basic substances are known as “bases,” which are opposite of an acid, and when they come in contact with each other, there’s a reaction since they are opposites. “Frequently, these chemical reactions are accompanied by the creation of bubbles and fizzing. So, with the baking soda gender test, the premise basically is that if a woman's urine is more acidic, it will react with the basic baking soda and create a chemical reaction characterized by fizzing. Conversely, if a woman's urine is more basic, it will not react with the basic baking soda, and no chemical reaction will occur,” he explains.

“The flaw in this test of course is that the gender of a pregnant woman's baby does not affect how acidic or basic her urine may be. And that is why the baking soda gender test doesn't work,” Abdur-Rahman says.

If you’re looking for some scientifically proven methods of determining your baby’s gender, Abdur-Rahman says you can get an ultrasound, a non-invasive prenatal test (NIPT), a chorionic villus sampling (CVS), or an amniocentesis.

Dr. Sherry Ross, OB-GYN and women’s health expert at Providence Saint John’s Health Center in Santa Monica, California, and author of She-Ology, explains, “NIPT, which takes maternal blood and determines chromosomal abnormalities and gender, can be done as early as 10 weeks. The NIPT is cost effective, no risk to the baby and has a 98 to 99 percent accuracy rate.” This was the option my husband and I did at 10 weeks — the Harmony test — and we found out we were having a boy way before that 20-week anatomy scan. It was nice to stop calling the baby an “it” so soon and to know he didn't have any chromosomal or genetic disorders.

“CVS can also be done from between 11 to 13 weeks gestation,” says Dr. G. Thomas Ruiz, an OB-GYN at MemorialCare Orange Coast Medical Center in Fountain Valley, California. However, this test is super invasive and it seems like the risks outweigh the outcome. “Chorionic villus sampling is an invasive test which involves testing placenta and pulling tissue from the placenta. As this test is invasive, it does carry a risk of causing a miscarriage. Chorionic villus sampling is not a test that should be ordered for sex determination because of the nature of the risk of the procedure,” he says. “With the increasing popularity of NIPT, CVS has become less and less popular. This is because NIPT can provide much the same information as a CVS can. But, while a CVS is invasive, and carried with it a risk of miscarriage, NIPT is not invasive,” Abdur-Rahman adds.

Amniocentesis is a lot like NIPT and CVS Abdur-Rahman says, as it directly examines your baby’s cells and genetic material. However, it’s also pretty invasive. Under ultrasound guidance, a needle is inserted through your abdomen and then through the uterus. Ouch. Then, your doctor uses a syringe to remove some amniotic fluid. Once these cells are obtained, the genetic material can be examined, Abdur-Rahman says. “Typically, because amniocentesis is invasive, it is only reserved for genetic testing being done to rule out serious genetic diseases,” he explains.

So while it may be a fun way to pass the time, and with a 50/50 chance of being accurate, you can’t really determine your baby’s gender by peeing on baking soda. If you just can’t wait for that anatomy scan ultrasound to determine the gender, science has come a long way to help us be able to find out the sex faster — all while making sure there are no chromosomal abnormalities — with a simple blood test.

More Like This
Are Boy Babies Usually Late? Signs Your Baby May Be Born Late
25 Baby Girl Names That Begin With D
Are You Leaking Amniotic Fluid Or Is It Normal Discharge? Experts Explain
What Does Amniotic Fluid Smell Like? A Nurse Explains