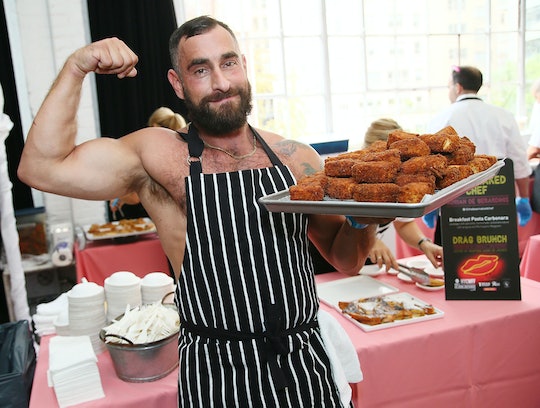 Another season, another awesomely dramatic dinner with the women of The Real Housewives of New York. In the preview for tonight’s episode, they have another meal that is sure to erupt in deep-rooted issues coming to the surface and drinks thrown all over the place. The only thing that could save this dinner is the Bear-Naked Chef who is on hand to cook for them. After tonight’s episode, you are definitely going to wonder if the Bear-Naked Chef has Instagram, because his whole shtick seems too wild to be a real thing. As it turns out, he does have an Instagram account, where he shares more details about his life, his fitness, and what he gets out of cooking for people in nothing but an apron.

If you want to get a closer look at his, um, recipes and even see some videos of him cooking in next to nothing, you can find that on his Instagram account. He also has a YouTube channel dedicated to his craft that turned all of the women of RHONY into giggle schoolgirls. Although to be honest, it doesn't take much to bring out the immaturity in that bunch, which can probably be said for any group of friends and frenemies. But they definitely seem to eat up the idea of the Bear-Naked Chef preparing and cooking their meal for them in-house in tonight’s episode and he has a pretty strong social media presence.

The Bear-Naked Chef, whose real name is Adrian De Berardinis, might have used his athletic physique to pull in the views and gain some followers, but he is legitimately a good cook, which is like an added bonus for some. In 2016, he told Equality 365 that he came up with the idea to be a naked chef while he was starting a catering and personal chef business. He said that he had already done some camera work for a web series and it made sense for him to try and use another platform to get his work as a chef out there.

"Programming naked is sort of becoming a thing now," he pointed out. "There is Dating Naked and Naked and Afraid. I live alone and cook naked quite a bit of the time. There is something kind of sensual about it. I just thought why don’t I just bring that out digitally and share my recipes with people? The naked thing is obviously a hook for a lot of people and gets them interested… I decided to offer recipes that are fairly easy to prepare with very sophisticated flavors that I have been cooking my entire life."

The Bear-Naked Chef said that cooking is in his blood and that, growing up in an Italian home, he learned to cook from a very young age and most recipes have stayed with him over the years. At the time of his interview with Equality 365, he said that he ran his catering business fully clothed, but that he wouldn't be opposed to taking his naked cooking into his business outside of his web series. But it was always important to him that people hire him because of his food.

I can't speak for the women of RHONY, but I would imagine it’s a little of both. They seem to thrive on unique dinner parties in which they can hash out all of their issues and air each other’s dirty laundry, but they also probably want gourmet food at the same time. Luckily, the Bear-Naked Chef offers that in tonight’s episode.

If you, too, would like to spice up your next dinner party that would hopefully be less dramatic than those of RHONY, you can arrange for the Bear-Naked Chef to come to your home and cook while wearing next to nothing. Personally, I might not be mature enough to not make all kinds of food and sex-based puns, but it’s definitely a unique way to have dinner served.