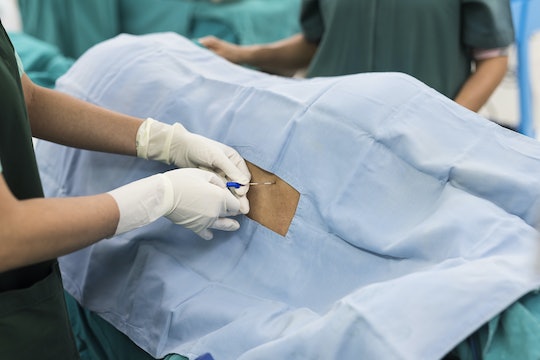 If You're Worried About That Epidural Needle, Here's What An OB-GYN Wants You To Know

Many women, whether it was already planned, or it happens in an emergency, end up having an epidural during their labor. To be honest, it looks pretty intense from what is portrayed in movies and television. And as someone who is hoping to have one during her birthing process, I have a few questions. How bad is the epidural needle pain, what does it feel like going in, and lastly, for those women who have apparently been searching this on Google, does the epidural needle stay in your back during labor? I’m pretty sure having a needle in your spine the entire time would be awful and even more uncomfortable than labor. But I guess you never know what will happen with 100 percent certainty until you’re in the midst of it?

Thankfully, even though epidurals sound pretty scary, they aren’t quite as scary as having a needle in your back the entire time you’re in labor like an IV in the arm. Dr. G. Thomas Ruiz, an OB–GYN at MemorialCare Orange Coast Medical Center in Fountain Valley, California, tells Romper, the epidural needle, once inserted, “is replaced with a soft plastic tube so the medication can be delivered continuously via a pump. Once the delivery is done the epidural catheter is removed. The catheter is soft and has a narrow diameter, so it does not pose a problem during labor.”

As far as what it feels like when the needle goes in, many women on a Baby Center forum described it as feeling like a typical injection or like getting a tattoo. However, many noted that the pain level depended on how long it took the anesthesiologist to get the needle in the right place and how many pokes it took. Fingers crossed you get a seasoned epidural veteran.

So how does an epidural work, exactly, and how long until I’m not in severe pain from contractions anymore? Once that needle is in and out, and the catheter is in its place, an epidural works by taking away the pain of your uterine contractions without affecting your muscles, according to Ruiz. “You will lose sensation in your legs, making it difficult to walk. So you will have numbness down to your toes. The epidural usually takes 15 minutes to work,” he explains.

Additionally, “labor epidurals are used during the active phase of labor to blunt or relieve the pain of uterine contractions. The epidural is typically placed by the anesthesiologist once a woman enters the active phase of labor,” Ruiz says. “When a woman gets to the pushing phase, the epidural is often turned off or turned down to allow the woman to feel the pressure of the fetal head against the perineum, creating a sense to push.” However the timing is pretty delicate and important when it comes to controlling the epidural. “Turn down the epidural too soon, the pain of contractions can inhibit pushing in some women," Ruiz explains. "One technique used to maximize the pain relief provided by an epidural is to wait until the woman is crowning before lowering the epidural.” He adds that once the perineum is stretched, the women can feel that and then will get the urge to push. “A uterine contraction monitor can also let mom know when it's time to push without her feeling the pain of the contractions. Women who have had previous children can often push under the full effect of an epidural as they have previously been through the birth process."

So thankfully, you won’t have a needle sticking in your spine the entirety of your labor if you choose (or have) to get an epidural. While the initial process of having it administered may not be the most pleasant sensation in the world, it’s not so bad, as long as the anesthesiologist gets it in on the first try. And if you’ve gotten a tattoo before, you definitely got this.

More Like This
14 Free, Printable Birth Plan Templates For Every Kind Of Delivery
Pelvic Pain During Pregnancy: What Causes It & How To Deal With It
Yes, It’s Possible To Get Pregnant If You Have An IUD
Here’s Why Your Vagina Itches At Night, According To Experts