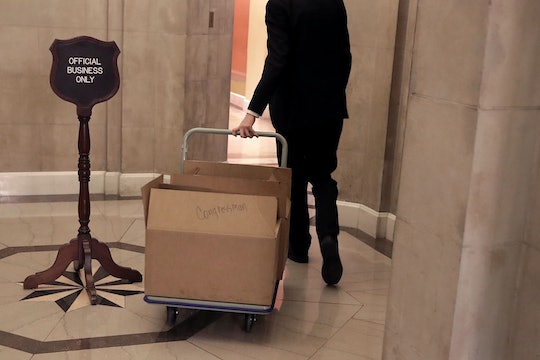 Here's What The GOP May Cut In Its AHCA Revision

It hasn't even been a full month since the Republican Party's disastrous attempt to replace the Affordable Care Act was scrapped. But that doesn't mean a renewed attempt at a health care bill isn't in the works. President Trump, who reportedly is a pretty big fan of winning, was never going to take such a loss lightly. But what changes do the Trump administration and Republican legislators plan to make this time around? Does the GOP's health care bill get rid of pre-existing conditions?

The American Health Care Act sputtered and died before it hit the floor because it just couldn't get enough support, even within the Republican party. Some considered it too moderate, and one issue that appeared to crop up time and again was the President's promise to mandate insurers offer plans to people suffering from pre-existing conditions, a popular Obamacare (or the Affordable Care Act) hold-over provision. As two GOP lawmakers are reportedly attempting to revive the AHCA with key compromises they hope will bring the necessary 216 votes they couldn't get before, it seems this new bill would give insurers the ability, by opting out of "community rating" coverage, to charge people with pre-existing conditions exorbitant fees for coverage. As Simon Maloy of Salon pointed out:

Hollowing out pre-existing conditions protections (as this compromise would) might squeeze some votes out of the hard-right flank of the House GOP caucus, but it will also make the already unpopular AHCA even less palatable for the voting public.

The new version of the AHCA, or AHCA 2.0, if you will, includes an amendment called the MacArthur Amendment. New Jersey Rep. Tom MacArthur, a moderate and co-chairman of the Tuesday Group, is brokering a compromise with North Carolina Rep. and chairman of the conservative House Freedom Caucus Group, Mark Meadows, according to The Hill.

According to documents obtained by Politico, the MacArthur Amendment would give insurance providers the ability to apply for limited waivers to circumvent community rating rules. These regulations were put in place to make sure insurers were not charging sick people more money for being sick. In other words, the limited waiver option would "create an option for states to obtain Limited Waivers from certain federal standards, in the interest of lowering premium costs and expanding the number of insured persons."

Certain community rating rules would not be considered, such as gender, age, and health status. Unless, of course, your state happens to be participating in a high risk pool. At that point, sick people can be stamped high risk and forced to pay extra fees in the hundreds or thousands for their health care. Or, even worse, lose access to health care altogether.

Sorry guys, not loving this option. Back to the drawing board.