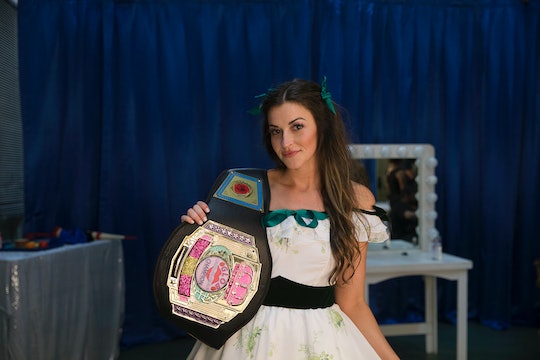 Are Tia & Arie Built To Last After 'The Bachelor'?

Ever since Arie Luyendyk Jr.’s Bachelor contestants were revealed ahead of the season premiere, there was some curiosity about Tia Booth, who is actually real life friends with Raven Gates from Nick Viall’s season of The Bachelor. Although the two women are each their own person, you can’t help but wonder if Tia’s fate on the show will be similar to her friend’s, so you have to ask, does Tia end up with Arie on The Bachelor? To be honest, if she doesn't, she could have a future with another show in the franchise, whether it be Bachelor in Paradise or even The Bachelorette, because right now it looks like her journey is playing out very similar to Raven’s.

Raven, the sweet but confident and plenty capable southern belle of the season, made it all the way to the fantasy suite dates and even claimed to have had her first orgasm with Nick. Now, I don’t know if that’s entirely accurate, but so far, it looks like Tia is poised to make it just as far, or even well past the overnight dates. Given Tia’s similar personality and of course matching Arkansas accent, she’s like a Raven 2.0 for some fans, which isn't a bad thing at all. But since Raven walked away from the show with a broken heart, will Tia meet a similar fate?

Tia has been careful not to give away any clues on Instagram, indicating how long she lasts in the race for Arie's heart. But if I may put on my Bachelor tin foil hat here, the way Arie spoke about Tia in one of his People blogs made it seem like his feelings for her were more past tense, like he was talking about an ex girlfriend rather than someone he ended up proposing to in the end.

"She always, no matter what, made me feel happy and comfortable," Arie wrote about Tia. "From the moment I met her, Tia kept me on my heels. Our very first interaction was her being hilarious and brash." I hate to be pessimistic about what happens with Arie and Tia on The Bachelor, but that sounds more like he’s talking about someone he used to date.

Although he went on to admit that during their date in the everglades, he was falling for her, Arie also wrote, "In this moment I had so much hope for the journey working, and knew now, more than even, that I could find my fiancé and future wife." That sounds more like she gave him hope for the dating process as a whole rather than just their relationship. But maybe I'm reading too much into it?

Judging by Tia’s Instagram, family seems to be very important to her, and judging by a sneak peak for hometown dates on The Bachelor, things might not go well for her budding relationship with Arie if her family has anything to say about it. In the promo, it looks like Tia’s brother is understandably cautious of The Bachelor and whether or not Arie is truly the right fit for Tia. This could be all part of a misdirect to throw us off that these two are endgame, or it could indicate that their story is coming to an end.

Given Arie’s connection to both Becca Kufrin and Lauren Burnham, I can’t see either of them getting the boot just yet. It’s possible that Kendall Long is the contestant who gets eliminated after hometown dates, but from social media and the way Arie talks about the experience now, it seems like there’s a good chance that Tia isn't going to make it to the final two, unlike her BFF Raven.

Fortunately, there is a light at the end of the tunnel in such cases. As Raven herself did, Tia could get the opportunity to go on Bachelor in Paradise this summer and find love in the more relaxed and less competitive atmosphere. Raven was part of the cast for Season 4 and after meeting Adam Gottschalk, the two hit it off and are still together outside of the Bachelor franchise, so there’s still plenty of hope for Tia if she doesn't end up with Arie.