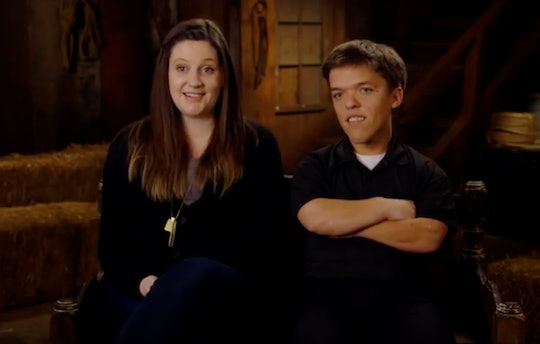 Zach and Tori Roloff have some pretty major life events coming down the pike right now. The couple's eldest child recently turned 2 years old and now they're expecting a second child, a baby girl! Fans will get to enjoy the expectant mama's pregnancy journey on the upcoming season of Little People, Big World on TLC. While viewers await more new episodes, something fans have perhaps wondered about is whether Tori Roloff works or has a job outside of her reality TV career.

Tori is one of the rare few reality TV stars who does have a job outside of her show. In fact, she's got a career outside of reality television, according to In Touch Weekly. Before giving birth to Jackson in 2017, the 28-year-old worked as a teacher, according to People. Like most new moms, Tori went on maternity leave in April 2017, a few months before her son was born, according to In Touch Weekly, but it's unclear if she ever returned to teaching after her son arrived.

In an Instagram post announcing that she was leaving her teaching job for maternity leave in April 2017, Tori said she was looking forward to returning to the school to introduce the kids in her class to the baby.

"Bitter sweet day!!! It was my last day with my kinders and to say I'll miss them is an understatement. I am so thankful to have had a group that was so easy and respectful. Saying goodbye to them was so hard, but I know we have such An amazing adventure ahead of us. Can't wait to take baby roloff back to school to introduce him to the kids he's listened to the last 9 months," she wrote on Instagram at the time.

Since then, though, she hasn't posted anything that would suggest she's back to teaching full-time. It appears she opted to focus on raising her son. Now that she's pregnant with her second child, it doesn't seem like she'll be in a rush to get back to that, though anything is possible, of course.

During the most recent season of Little People, Big World, Zach and Tori hinted at the fact that they were struggling a bit financially. The couple revealed that they had more than one mortgage, and were feeling a little overwhelmed. In a trailer for the already-aired season, they admit that they're not making enough money to feel fully comfortable, especially after welcoming a baby into their family. "We have two mortgages ... I'm way in over my head," Zach said in the trailer.

It appears, however, that everything worked out. The couple will soon welcome another child into their lives, and has been enjoying family fun and trips with Jackson. In fact, they jetted to Disney earlier this year, according to Us Weekly.

Fans love watching Zach and Tori's family grow, and look forward to seeing how the newest addition fits into their already-adorable dynamic. The baby is due in just a matter of months, so it seems unlikely Tori will be returning to work now, if she hasn't already. Regardless, she's doing a great job being a mom — which is absolutely a full-time job.