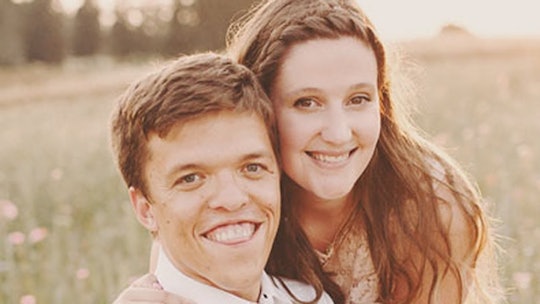 Does Zach Roloff Work Outside Of 'Little People, Big World'?

There's some very happy news circulating around the Little People, Big World universe: the Roloffs are expecting their second child together, and it's a girl! However, after a recent blow on the sale of their home, Tori was quoted as saying their cash-flow was "nil," according to Us Weekly. With that said, it's likely a point for concern considering that the couple is expecting again, and it's perhaps left some wondering if they have income outside of their TLC reality show or, more specifically, does Zach Roloff work?

To recap: Zach and Tori Roloff recently moved to a new house, possibly preemptive of welcoming their second child. But, according to Radar Online, the couple reportedly lost money in the sale, to the tune of about $47,000. And in a recent interview, according to Good Housekeeping, Zach said that he is "in over his head," because at the time, they had two mortgage. (This was before the house was sold.)

Naturally, all of this has probably prompted some to wonder whether or not their Little People, Big World spots were supporting the young family. And the answer is, well, they were. But it is not the only way that they were generating income for their household.

Yes, Zach's main job is being a reality TV personality, according to Us Weekly. He and his family have been on TV since 2006, and this hasn't changed. But individuals who are on TV can certainly make a lot of money for their appearances, and more so as the years go on and interest increases. It wouldn't be unreasonable to imagine that the Roloffs were making a significant amount of money for their TV show and any reruns that are airing, especially given that it's been on the air for over a decade.

Be this as it is, is it impossible to know exactly how much they made, and taking Zach and Tori's comments into consideration makes it seem as though it wasn't enough money to sustain them forever. According to Good Housekeeping, some rough estimates suggest an individual on a show like Little People, Big World could make between $7,000 and $10,000 an episode, meaning that Zach could have potentially made around $120,000/year. This, of course, is a generalized estimate, and not based in any concrete information or numbers. And while that is a great salary, it is not enough to sustain a family forever.

Prior to going on maternity leave to have Jackson, Tori was working as a teacher, according to People. It is unclear as to whether or not she went back to work afterwards, but she would have to leave again soon as her second child is on the way.

In addition, it's likely that Zach was taking in supplemental income from another one of his positions. InTouch Weekly reported that he went to Portland Community College to receive his Associate's Degree, and alongside working on his family's farm, he was also a youth soccer coach.

Of course, this doesn't exactly point to what he does now for work outside of Little People, Big World, if anything, but it's very clear that there are so many options for him, Tori, and their family. Tori might go back to teaching, Zach might go back to coaching, they might start their own farm, or maybe even sign on for their own spinoff. Of course, it's hard to say for sure, but it's clear that this is a couple fans will love keeping up with for many years to come.