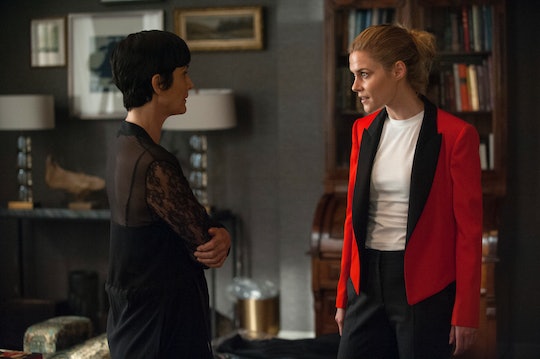 Warning: Season 2 spoilers ahead! Ever since the first time fans met her in the first season of Jessica Jones, Trish has yearned to feel like she's special. Sure, she was idolized by fans thanks to her days as Patsy, but that wasn't the type of attention she craved. She wanted to make a difference and be a hero like Jessica. And now it seems she may have finally gotten her wish. So does Trish have powers now on Jessica Jones? The end of Season 2 definitely seemed to imply as much.

Throughout this new batch of episodes, Trish went on a pretty dangerous journey. First, she started using Will Simpson's special inhaler, which acted like performance-enhancing drugs, allowing her to be extremely strong and powerful after just a single puff. There were some terrible side effects to it, though. Trish was constantly throwing up and looking exhausted all the time. It also clouded her judgement, since she was acting on so much adrenaline. But when the inhaler was out of juice, she was left in withdrawal and even went so far as to abduct Dr. Karl so that he could experiment on her like he did with Jessica in the hopes of giving her abilities.

The procedure didn't go very well and Jessica stopped it midway through since it looked to be killing Trish. And while she seemed to recover (after a few close calls) at the hospital, the doctors didn't seem to notice anything different about her. Both Trish and Jess seemed to mutually believe that Dr. Karl's attempts failed. But did they?

At the end of Episode 13, Trish was leaving Alias Investigations (after attempting to reconcile with Jess but to no avail), when someone bumped into her by the elevator causing her to drop her phone. Except Trish quickly put her foot out and was able to prevent the phone from hitting the floor. Sure, I suppose you could chock it up to impressive balancing skills or luck, but the expression that came across Trish's face after it happened makes me think that she knows something is going on. Can she feel powers inside herself now?

Obviously viewers are going to have to wait until Season 3 to get a definitive answer to that question, but it seems pretty obvious to me. Trish has been dreaming of this moment for so long. She's always wanted to have powers so she could feel like Jess' equal and help her to make the city a safer place. This may be her chance to do that, though it'll be interesting to see how these possible powers will vary from Jessica's and whether or not Trish will be able to control them.

Let's not forget that Jess was united with her mother, Alisa, this season who also had impressive powers. However, they were extremely unstable and could get out of hand whenever she lost her temper. Will Trish face those struggles as well? Will her side effects be completely different from either of the Jones women? Right now, it's impossible to say.

Either way, this could completely change Trish's storyline from here on out. And since she and Jess are no longer on speaking terms, it's possible she'll end up going through this life-changing event alone at first. I'm sure these two will reconcile eventually, which could lead to be a pretty badass team-up down the line. Regardless, I can't wait to see where things go from here. I only hope that Trish is able to harness whatever powers she may have, and use them for the greater good like she always intended.