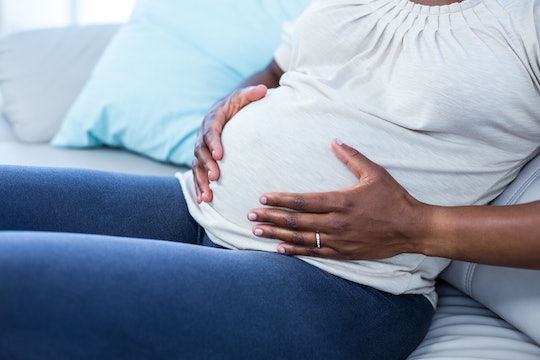 A Breech Baby "Drops," But Not Like You Think

Once you find out that your baby is breech, a host of questions arise that were never on your mind. How will delivery be different? Will your baby turn on their own? Do you need to have a C-section? All of these questions (and probably more) will cross your mind at some point. Before delivery day though, you might be wondering about the final weeks of pregnancy with a breech baby. For example, does your belly drop if baby is breech like it does with a non-breech baby? Luckily, breech pregnancies aren't too unlike "regular" pregnancies when it comes to your body's preparation for delivery.

According to the American Pregnancy Association (APA,) the term "drop" refers to the way your baby lowers into your pelvis in the weeks leading up to labor. In most pregnancies, the APA noted that that baby's head will descend lower into the abdomen, almost into the birth canal. However, when a baby is breech, they don't always drop as low as a baby normally would for an ideal delivery.

Breech babies do, however, drop in the technical sense of the word. Their bottoms or feet (depending on what breech position they're in,) will descend as low as they can in your abdomen. Many moms claim that their breech babies engaged (or dropped) as low as they possibly could — and some even turned after that point, amazingly. Birth International stated that it is more difficult for your baby to turn once they're fully engaged or dropped, but it's not impossible.

More often than not, breech deliveries are safe and without complication. C-sections used to be the norm for delivering a breech baby, but the same Birth International piece stated that it doesn't have to be your only option. A vaginal birth can still be considered even if your baby is breech.

Although having a breech baby undoubtedly comes with its fair share of worries, with the proper monitoring and communication, everything from noting when your baby drops till the moment they're delivered can be smooth and as worry free as possible.