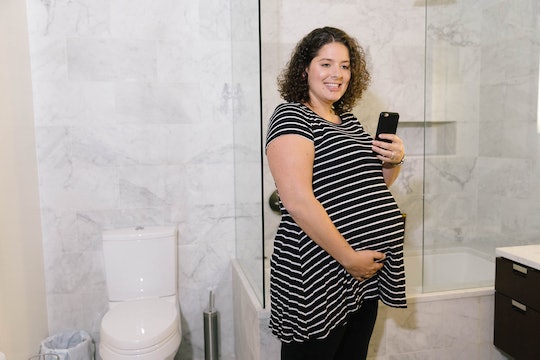 Does Your Hair Become Curlier During Pregnancy?

During my first pregnancy, my hair changed a ton. It was thicker and shinier and I loved it. During my second pregnancy, I have no idea what it did because it was always up in a ponytail. (Mom life.) But plenty of people experience changes in their hair throughout their pregnancies, whether it's in the thickness or even the texture. But does your hair become curlier during pregnancy? It certainly seemed like mine did.

I have naturally very, very curly hair. Before I had kids, though, it was easier to manage. I could sleep in a bun and the curls would be more loose and wavy. After I gave birth to my daughter, that all changed. My curls got curlier, my tangles were more difficult to manage, and the texture changed entirely. My hair requires a ton of product just to keep the baby hairs in place nowadays and if I want it to be completely straight? I have to pay someone else to do it. Don't get me wrong, my curls are gorgeous when I work with them, it's just that when I leave them be, they're extreme.

Do all women see a change in the texture of their hair while they're pregnant, though, or am I just the lucky recipient of a head that resembles a non-lethal Medusa? If you start with bone straight hair, will it shift? Does your hair become curlier during pregnancy, even if it was never curly before?

While it doesn't happen to every mom, lots of moms notice a change in texture in their hair and the amount of hair that they have, according to Clinical Obstetrics and Gynecology. The hormones of pregnancy slow down the rate at which your hair sheds, making it thicker and often more lustrous. Those same hormones also have a tendency to ramp up hair growth on the rest of your body as well. Many women, according to the study, even notice that the area where their pubic hair grows expands, and the hair under their arms gets darker and thicker during and after pregnancy.

As for it getting curlier, it's a pretty common occurrence. It could also get straighter. A textural shift in your hair is likely due to the changes that happen in your body during pregnancy, according to Fit Pregnancy. If you find yourself in the same position as me, let me tell you, it's easier to embrace it and learn to work with it than against it. Your body did this amazing thing and made an entirely new person — your hair is simply catching up.