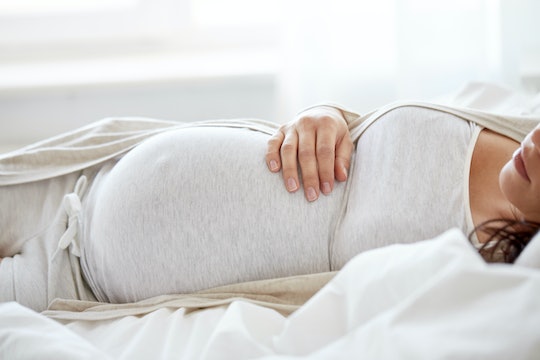 What's Going On With Your Ribs During Pregnancy? So Much

Pregnancy can make it feel like your entire body has to make adjustments for the growing baby, and in some cases that's exactly what's going on. But do your ribs actually change in size during pregnancy, or does it just feel sore in that area because of the kicking, squirming baby? You're not imagining things if that whole portion of your body feels different, and maybe not in a pleasant way.

The rib cage does expand during pregnancy to accommodate the growing uterus, according to Health. And even after the baby is delivered, it may not return to the pre-pregnancy size. "Some women report that even after getting back to pre-baby weight, the shape of their body has changed," said Los Angeles–based OB-GYN Pari Ghodsi, MD, FACOG in Health.

As you might expect, the people who have delivered babies themselves are quite aware of this phenomenon. Plenty of people have opened up about the rib cage expansion. "My rib cage expanded and although I look and feel mostly how I did before pregnancy and birth, my ribs are still wider (so are my hips, but I expected that more)," said one woman in The Cut. Three others also shared their adventures with post-pregnancy rib cage expansion, so it's far from an uncommon experience.

Celebs are also getting real about this particular pregnancy experience. For example, Busy Phillips opened up about her post-pregnancy rib cage expansion on Insta, according to Romper. "Yes. I really pulled out my wedding dress from 12 years ago and wore it on my show tonight. It basically fit except my stupid upper rib cage which grew after my 2 babies," she captioned the pic. She added that it was one of those things "no one tells you" about pregnancy.

Aside from some possible issues with bra or dress fittings, though, there don't appear to be many long-term negative consequences of this rib-expanding phenomenon. During pregnancy, however, experiencing pain around the rib area is not uncommon. (As though you need any more bodily weirdness going on at the time.) "Pregnancy rib pain can be the result of your baby physically kicking you in the ribs, stretching out under your ribs, or just moving by your ribs," according to Healthline. "The pain can also be caused by your muscles stretching out." Even the tiniest of babies can generate a surprising amount of force, and a solid kick to the ribs hurts.

Moms-to-be can make some adjustments to decrease the rib pain, though. Taking warm baths, practicing gentle stretches such as yoga, and taking pain relieving medication (with a doctor's approval) are a few ways to help deal with rib pain, according to Medical News Today. If you're at all concerned with aches and pains in this area, then don't hesitate to reach out to your doctor for advice.

Although they aren't the first area of the body you think about when it comes to pregnancy, the ribs are affected by the growing baby as well. The rib cage can be uncomfortably kicked or moved by the baby during pregnancy, and it may change sizes a little even after delivery. So if your ribs, of all things, feel a bit different, then rest assured that you are far from alone.