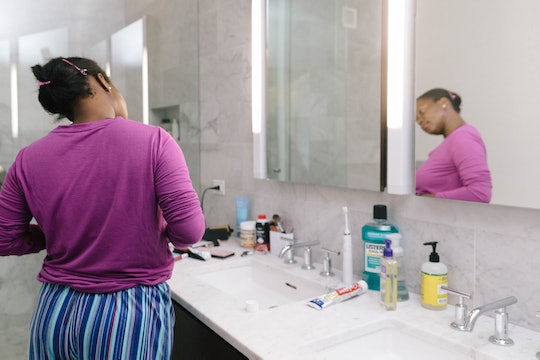 Here's Why You'll Still Experience Postpartum Bleeding, Even If You Have A C-Section

The first few weeks after delivering your baby are a whirlwind. There's the act of finally living with this brand new adorable human and trying to learn their likes and dislikes, their schedules, and personality, then there’s your own learning period. Things are going to be a bit different for your body and your mindset postpartum. And whether you deliver your baby vaginally or via C-section, you’re going to have some healing to do. But what about postpartum bleeding? Does your vagina bleed after a C-section?

Dr. Adrienne Zertuche, an OB-GYN at a division of Atlanta Women’s Healthcare Specialists, tells Romper that all women have bleeding postpartum, regardless if you’ve had a C-section or not — it’s a natural part of the postpartum transition. Why is that? It has to do with your placenta, according to Zertuche. It attaches to the uterus in order to capture oxygen and nutrients from the mother’s bloodstream and pass it via the umbilical cord to your baby. After the baby is born, the placenta separates and is removed from the uterus. "However, the site of that placenta had an excellent blood supply during pregnancy, therefore it takes a little while for it to stop feeding the baby and return to a pre-pregnant state. In the interim, it continues to bleed lightly and shed tissue called lochia,” she explains.

How long can you expect the bleeding to go on after a C-section? “For the first several days after a C-section, most women will have bleeding similar to a heavy period, and some may even pass small clots. However, postpartum bleeding tends to get lighter and lighter each day, and it typically resolves completely within four weeks. If your bleeding lasts longer than six to eight weeks, you should call your physician,” Zertuche says. “Regardless of whether you had a vaginal or cesarean delivery, [postpartum bleeding] can be heavy initially, but should get lighter and lighter each day.”

But there is such a thing as too much blood. “You should call your doctor if you’re soaking a pad with blood each hour for two hours, if you pass large blood clots, or if you have symptoms of a low blood count, like heart racing, shortness of breath, or dizziness or lightheadedness. These symptoms may indicate that your bleeding is too heavy," she explains. Additionally, the American Pregnancy Association (APA) noted if you have a fever over 100.4 degrees Fahrenheit, you should call your doctor.

In addition to keeping a close eye on how much you’re bleeding, it’s especially important to take it easy and take care of yourself after having a C-section — it is major surgery after all. The APA noted that once you’re at home you should keep your activity level low and avoid lifting anything heavier than your baby — so that means no chasing after older siblings or lifting them. The APA recommended you also “avoid most housework.” (Darn.) Make sure you’re drinking a lot of fluids to stay hydrated and try to eat healthy meals to prevent constipation and restore your energy levels, the APA noted. You should also avoid using tampons or douching, taking baths, public pools and hot tubs, exercising, sex, or repeatedly using stairs.

It looks like no matter which way you decide to give birth, you're not getting out of postpartum bleeding. But that's OK, because it will all be worth it once you're snuggling your very own newborn baby in your arms and kissing their soft, fuzzy head. Just take it easy and keep an eye on how much you're bleeding in between feedings and diaper changes.