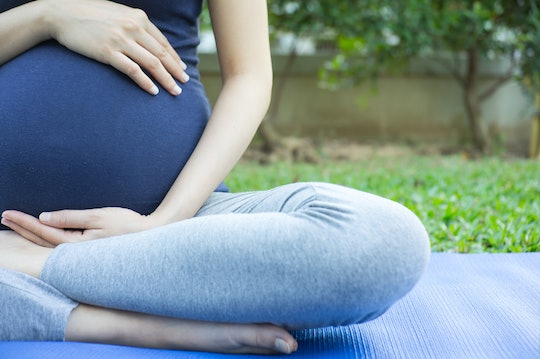 If Your Vagina Feels Sweaty During Pregnancy, Don't Panic — There's A Reason

There's no shortage of physical oddities that may come along with pregnancy — hair sprouting up from newly enlarged moles, dark blotchy patches on your face, stretch marks to rival a tiger. You may have even noticed that your vagina is smelling a little pungent lately, no matter how frequently you've been showering. All of these experiences are completely normal. Some women even complain about increased sweat in their crotch during their nine month marathon. But is this substantiated? Does your vagina sweat during pregnancy, or is it your imagination?

Increased sweat in general is a perfectly normal part of pregnancy, and can occur anywhere. Parenting magazine reported that the increased perspiration a gestating woman experiences is due to the combination of her metabolism being in overdrive and the extra blood pumping through her body. As you know, sweating is simply the way your body is designed to cool itself off.

But to bring it back to the vagina — no, the organ itself technically doesn't sweat during pregnancy, says Dr. Vidya, OB-GYN, although the skin between your legs and on your lower belly do. "However, there are increased secretions from the vagina, due to hormonal changes and softening of the cervix, which can mimic sweat," she tells Romper.

It's worth noting here that although the visible female genitalia is often referred to as the vagina, the outer portion is actually the vulva. The vagina is internal and together with the cervix, uterus, ovaries, and fallopian tubes comprises the female reproductive system.

But technicalities aside, experiencing a sweaty crotch during pregnancy is not unheard of. In an interview with Women's Health, Jeremy Fenton, M.D., a board-certified dermatologist at Schweiger Dermatology Group in New York and New Jersey, explained the difference between two kinds of sweat glands — apocrine and eccrine. Eccrine sweat glands produce the most moisture while apocrine glands produce the most odor, and Fenton said that your groin has a higher density of both than any other part of your body besides your armpits. So even in a non-pregnant state, you've likely noticed this undesirable phenomenon in your drawers — pregnancy just tends to ramp everything up.

If you're feeling icky down there (and especially if much of your pregnancy falls during the summer), take the liberty to freshen things up more often than normal. Washing between your legs and your vulva twice a day will keep the clammy feeling at bay, but skip the douche or feminine spray while pregnant, noted Parenting. Keep in mind that wearing cotton panties allows for a little more breathing room down under, and lets odors escape easier than other fabrics.

Speaking of hygiene, although pregnancy might have the hair on your head looking its very finest, the hair in your pubic area might be a different story — and it turns out, you have those pesky sweat glands to thank. When your glands get clogged from all that extra sweat and dead skin cells you're now producing, you're more susceptible to the misfortune of ingrown hairs, according to Parents. But before you put down that razor and head to the salon for a wax, remember that increased blood flow means your lady bits are extra sensitive during pregnancy. You can still try it, but don't say I didn't warn you.

And while we're on the topic of funky things your vagina does during pregnancy, I might as well go ahead and mention that your vulva might actually change color or start showing varicose veins. Is it weird? Um, yes. Is it normal? Totally. And as humbling as it is to have your body start doing odd and unexpected things, you'll forgive its offenses the moment you hold that baby in your arms. (Though it may take your vagina awhile to forgive you.)