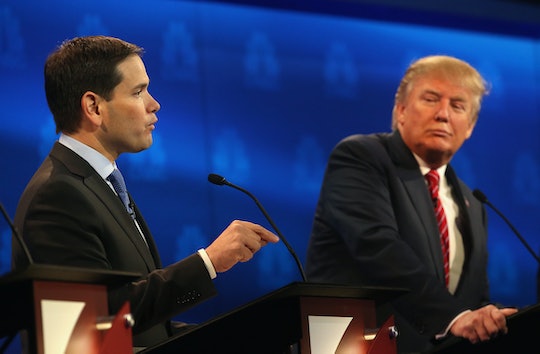 Donald Trump Calls Marco Rubio “Ugly” And “Overrated,” Proving Yet Again That He Really Is Just A Bully

Donald Trump has no filter between his brain and his mouth, so you can count on him to say exactly what he’s thinking at all times. Some find that endearing — it’s part of his charm, if you want to call it that. But sometimes he just sounds like a bully. Yesterday, Trump called Marco Rubio overrated and ugly in an interview with Bloomberg. And no matter how you feel about the hotelier, that’s just sort of mean all around. Didn’t he see Ariana Grande’s tweets yesterday morning about body shaming and love? Mr. Trump should play a little nicer.

He told the interviewer:

He's nowhere in the polls. Personally, I don't think he's going to make it. I called him a lightweight. I said at one point he was a lightweight. And I don't mean to be insulting, but I do describe people somehow well...I watched somebody on [MSNBC's Morning Joe] show this morning and he's fawning over him. He says how handsome [Rubio] is. I don't know, I think I'm better-looking than he is. Am I better-looking than him?

Apparently, Trump also doesn’t like how Rubio sweats on-stage. Trump  even went as far as to send Rubio a “care package” of towels with a note about his sweat glands. Even if it is tongue in cheek, it's sort of a mean thing to do. Politics is hard enough without locker room antics like that. It's sort of undignified. If he'll treat his opponents like that over here, imagine the sort of care packages he's send Angela Merkel or Putin if he were ever to become President. That won't go over well.

You can't blame Trump for acting out today against Rubio. Since the last debate, The Donald has been slipping in the polls. Ben Carson has a slight edge on the hotelier and it's making him nervous. Trump has already written Jeb Bush out of the game (or maybe he has some respect for him) but Rubio should be making him a little bit nervous.

Marco Rubio has experience, can speak at length about policy, and speaks Spanish, which is sort of a big deal this time around. He could turn into a formidable candidate. Of course Trump wants to start taking him down. But if Trump really wants to be president, there are better ways to go about it. You can expect politics to get a little dirty, but calling someone out on their looks and sending them sweat towels is a little, well, juvenile. Is this a frat house or the Republican primary race? It's hard to tell most days.

Rubio, for his part, has kept quiet about Trump. He even came to Trump’s defense about hosting Saturday Night Live this weekend, saying that if viewers don't like Trump, they just shouldn't watch the show. It's a pretty measured reaction towards a man who's mocking your sweat glands. But if anything, that's how real politicians behave.