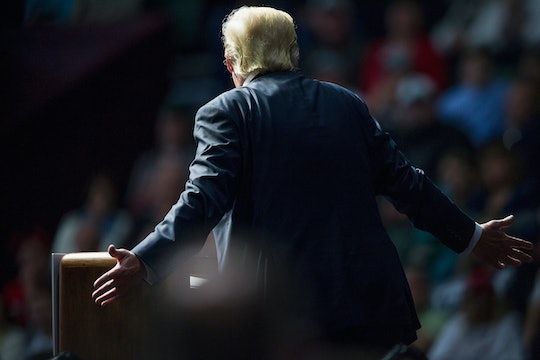 Donald Trump is no stranger to making vulgar and sexist comments about women. And he’s at it again, this time launching a particularly crass attack against presidential contender Hillary Clinton — former First Lady, former U.S. Senator, former Secretary of State, and current Democratic frontrunner for the Oval Office. But, rather than attempting to chip away at her positions or record as a true rival might, Donald Trump used more vulgar language against Hillary Clinton. And the derogatory term he chose to lob this time... well, it’s probably not something that a leader of the free world would ever say.

At a rally on Monday, Trump made a crude reference to Clinton’s disappearance from the debate stage Saturday, asking the crowd where they thought she went during the commercial break. “What happened to her?" Trump asked. "I know where she went. It's disgusting. I don't want to talk about it. No, it's too disgusting. Don't say it, it's disgusting.”

Later, Trump went on to describe Clinton’s 2008 loss to Obama after being the presumptive nominee for much of the primary season: “Even her race to Obama, she was gonna beat Obama [...] she was favored to win — and she got schlonged. She lost.”

Yes, the Republican frontrunner weaponized an already gross term for the male genitalia and launched it at a female colleague. And what’s worse, he wasn’t booed for it.

Of course, this isn’t the first time Trump has used sexist language when it comes to women in the public eye. His crude attacks on Fox News' Megyn Kelly and GOP opponent Carly Fiorina already proved that Trump is more than willing to violate women’s personal space in ways that wouldn’t occur to him when dealing with men. But lately, Clinton has borne the brunt of his attacks. In an interview with Barbara Walters last week, Trump said that Clinton “doesn’t have the strength or stamina” to be president, implying that life on the campaign trail was too much for the political veteran.

The idea that Clinton might need bathroom breaks or — gasp! — sleep may seem abhorrent to Trump, but making them topics of his stump speech definitely crosses a line. What’s worse, his disgusting comments are met with applause from his supporters, an indicator that Trump seems to translate into widespread support for his ideas. So, we can only assume he’ll keep going and say something even worse the next time. Because if there’s anything Donald Trump has shown the American people in this race, it’s that he’ll say nearly anything as long as the crowds keep cheering.