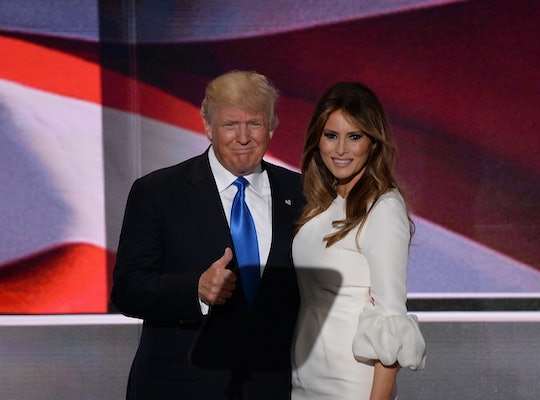 Donald Trump Did Apologize To Melania, Even Though He Said He Didn't

It's easy to see why some people tire of politics quickly. Namely because politicians change their stories all the time. Normally, politicians fib or gloss over or straight-up lie to make themselves look better. Which is why it's super weird that Republican presidential nominee Donald Trump lied about apologizing to his wife Melania about the lewd comments he made about women in a leaked audio of an Access Hollywood interview published by the Washington Post as well as allegations of sexual assault against him. But here's the thing: Trump did apologize to Melania, so why would he say he didn't during the final debate?

On Wednesday, while defending himself, Trump said that he didn't even apologize to his wife, because he "didn't do anything" wrong. If you've ever watched an episode of Law & Order, this might seem plausible. A person under questioning wants to prove their innocence, guilty or not, and not apologizing to those close to them would be a sign that they were content with their innocence. Trump made it seem on Wednesday that he didn't see a need to have an awkward convo with Melania in the kitchen about the fact that he giggled on a tape about grabbing other women's genitals without their consent.

In the name of full disclosure, even I wrote for Romper two weeks ago slamming Trump's apology in the wake of the 2005 Access Hollywood leak. Because, in multiple apologies given over the course of 48-hours after the leak, Trump didn't really apologize to anyone. He did not mention his wife. He did not mention anyone, except himself, really, and said that when he talked about grabbing women "by the p*ssy," he thought he was in a locker room and not a press bus.

Trump does not apologize ever because Trump "is never wrong," as he told Jimmy Fallon. When he's been forced to apologize by his campaign, he doesn't do it very well. So on Wednesday night, he might have been thinking about those initial, staged apologies about the leaked hot mic audio.

But on Monday, Melania gave two interviews. She recorded sit-downs with CNN's Anderson Cooper and Fox News' Ainsley Earhardt. In both of those interviews, Mrs. Trump said that she "accepted" her husband's apology. She said to Earhardt, “Those words, they were offensive to me and they were inappropriate. And he apologized to me. And I accept — I accept his apology. And we are moving on.”

OK, so there's one apology to his wife. On CNN, she was more vague, saying, "I accept his apology. I hope the American people will accept it as well. And it was many, many years ago. He's not the man that I know." Whether that means she accepted his broadcasted apology or that she accepted a personal apology is up to interpretation.