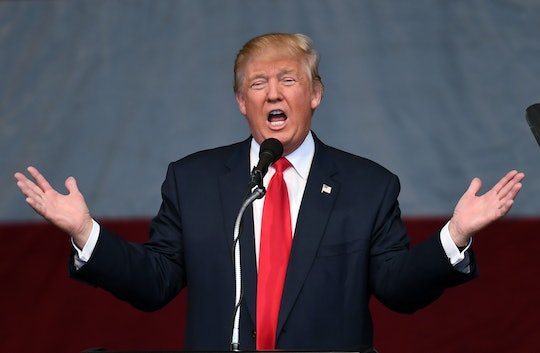 Late Friday night, Donald Trump released a video on Facebook addressing the lewd comments about women that The Washington Post leaked earlier in the day. But Donald Trump's apology video isn't convincing anyone and technically, it's not even really an apology. Someone should give the Trump team the basics on how to actually sound sorry, feign understanding why people are so disgusted by the comments he made, or even just use the five letter word: sorry. Trump's apology video begins with the Republican candidate sitting somewhere in Trump Tower with New York City glowing behind him.

Trump begins by saying that he "is not a perfect person" and that he's never "pretended to be someone [he's not]." Trump admits to saying and doing things he regrets and then says that the words on the "decades-old video" released on Friday are one of those things. "Anyone who knows me knows these words don't reflect who I am. I said it, I was wrong, and I apologize," he said.

But that's it. Then Trump says that he pledges to be a "better man." He talks about meeting women on the campaign trail. Then he goes for an attack, calling the focus on the leaked hot mic comments a "distraction" from the real issues and, finally, claims that when it comes to women, the Clintons are worse.

No one on social media seems to buy it and are actively breaking down his statement bit by bit. There are so many ways this apology stinks just as much as the original gross statements about women and how he interacts with him. Forget the fact that there are many people who know Trump that claim he does still make comments like those in the Access Hollywood, because that's just gossip.

The real problem with the statement is how Trump focuses on himself and not who he's offended. He claims he's a changed man, but his original statement earlier in the day called the comments "locker room banter." So it doesn't seem like he's really understood the issue or changed how he thinks about women or consent.

He doesn't apologize to his wife, family, or supporters who have had to defend him, as politicians caught in scandals usually do. He calls the video "a distraction" and tries to undermine it by saying that it's "decades-old." But a presidential candidate not understanding the basics of consent or why he is so offensive is the real issue. To finish, Trump points a finger at former President Bill Clinton and his extra marital affairs. Trump closes by promising to "talk more" about the Clinton's and women in the coming days. He doesn't sound sorry; if anything, he seems angry that he was caught and people seem to be making such a big deal out of it.

People have many complaints about the apology:

The apology makes his comments about "just kissing" women or grabbing their genitals even worse. Even Billy Bush, the Access Hollywood host that Trump was talking to on the old tape, showed more regret and embarrassment about his past actions in his apology. That it took Trump a few statements to address the problem and that he still doesn't seem to get what's so bad about them should be a problem for his campaign. But Trump has been pretty much invincible throughout this entire campaign and there are some supporters standing by him, seemingly convinced by his late-night "apology."

It's anyone's guess whether the Trump tapes will affect his campaign or the upcoming debates ahead of the election in just a month. The only thing for sure is that we haven't heard the last of it just yet, apology or not.