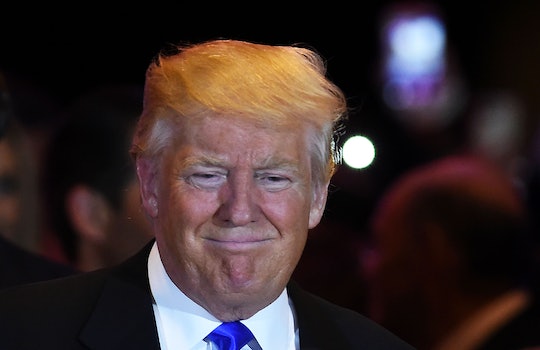 Donald Trump, now the presumptive Republican presidential nominee, announced his candidacy last year by proudly and emphatically referring to Latino immigrants as "criminals" and "rapists." His major foreign policy proposal is to build a giant wall along the U.S.-Mexico border to keep said immigrants out and somehow force the country to pay for the monstrosity as well. But Donald Trump wants everyone to know that he actually loves Hispanics! And it looks like he might still have a thing for his ex-wife as well. In a bizarre Cinco de Mayo move that's also disturbingly emblematic of the man's outlandish campaign and ascension to become one of the most influential figures in the GOP, Trump tweeted a photo of himself eating taco salad atop of photo of a bikini-clad Marla Maples, actress and TV personality, and (again) became an internet joke.

The tweet went live around 3 p.m. ET on May 5, just in time for Cinco de Mayo, the day that Mexico commemorates the 1862 victory of the Mexican army over the French. The margarita-soaked "Cinco de Drinko" festival is an entirely American invention widely considered to reduce the Mexican culture to a series of unflattering stereotypes. But that didn't stop the Donald, who picked up some "authentic" Mexican fare to celebrate ... from inside a building that he owns.

"Happy #CincoDeMayo!" he captioned the photo. "The best taco bowls are made in Trump Tower Grill. I love Hispanics!"

In addition to showing off the his "good size" hands as well as his assortment of trophies (??), the obvious goal of this official @realDonaldTrump tweet is to woo Hispanic voters, who overwhelmingly do not like him at all. Journalists quickly swooped in to fact-check his lunch (taco bowls are sold at the Trump Tower Café, not Grill, and they are not, in fact, Mexican) and to point out that his ex-wife is trapped underneath.

Twitter could not believe the (ahem) irony of the known immigrant-hater noshing on a taco bowl on Cinco de Mayo, let alone on top of a photo of his ex:

Others simply weren't buying the tweet's (transparent) sentiment and honed in on the overt racism behind it:

Jorge Ramos, the Univision anchor who was famously removed from a Trump press conference last year when refused to sit down after asking a question about the candidate's stances on immigration that Trump did not like, offered some real talk.

One man facetiously reminded everyone that it's always a good time to shamelessly pander to voting blocs and offensively stereotype a huge, diverse category of people like "Hispanics."

Overall, Twitter seemed to have a tough time getting past the whole Marla Maples thing:

A woman named Andrea Mucino took things one step further, using Facebook to rip Trump to shreds (not unlike the lettuce on his bowl):

Too bad a taco bowl isn’t Mexican, the Trump Tower Grill isn’t either, you’re not eating taco bowls from New York because you’re in WV today, Cinco De Mayo isn’t a Hispanic holiday it’s a Mexican one, and you are the same color as the taco bowl shell. But I digress!

In case you recognized the name, Mucino is also Miss West Virginia USA 2015. It's important to remember that Trump owned the Miss USA pageant group until he sold the entire Miss Universe Organization last year. Apparently, Trump did not like Miss West Virginia's commentary on his spray tan (Shocker!):

Last month, Trump promised supporters that he would not bore them by acting presidential. Trump, my friends, is a man of his word. He seems to have adopted making what should be politically inept moves like this into a campaign strategy. He's successfully managed to drive both of his opponents for the nomination out of the race this week and is probably celebrating with the best tequila shots, taco bowls, and mariachi bands right now. Isn't 2016 great?