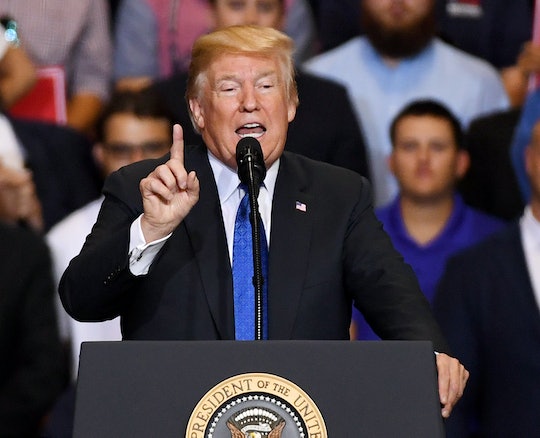 Here's one thing we know for sure about President Donald Trump: my God that man loves his Twitter. He loves everything about it, I think, but perhaps especially that sort of mic drop effect of tweeting out garbage and just leaving it there for the rest of us. I think he also enjoys tweeting things that come across as facts but have no basis in facts because he probably doesn't bother reading anyone else's tweets. His latest rant topic? The woman accusing Supreme Court Justice nominee Brett Kavanaugh of sexual assault. Trump is questioning Christine Ford's allegations on Twitter, because that way he figures he can get people on his side without allowing her to respond. Thereby furthering his own political agenda and complicating matters in the process.

Trump was the man who nominated Brett Kavanaugh for the Supreme Court, which means that he is naturally going to want his nomination to be pushed through at all costs. Especially considering Kavanaugh's alleged stance on Trump's autocratic power in the White House... you know Trump wants a man sitting on the Supreme Court who might possibly believe the President is above the law. But there's more to his protection of Kavanaugh in the wake of Christine Ford's sexual assault allegations than meets the eye. These tweets speak strongly of a man who doesn't understand women's response to sexual misconduct on any level.

Trump first tweeted in the early hours of Friday morning that he believed Kavanaugh was a "fine" man who is "under assualt" by left-wing politicians. Then naturally he quickly turned it around to be about how mean everyone is to him, saying "I go through this with them every single day in D.C."

He then went on to say that "if" the attack that happened to Christine Ford was as "bad as she says," Trump has personally decided that "charges would have been immediately filed with local law enforcement." Because that's how it always happens in cases of sexual assault, right? Women feel safe enough to report it and then it's dealt with in a timely, respectful manner by local law enforcement? Right?

So let's walk through the life of Dr. Christine Blasey Ford since she made the stunningly brave decision to come forward with her sexual assault allegations; she's had her address published online at least three times, been threatened and harassed to the point where her family has been forced to go into hiding. According to the Huffington Post, Ford and her husband cannot even live with their children for fear that they'll be attacked.

Ford was just a teenager living outside of Washington D.C. when Kavanaugh allegedly attacked her. As difficult and awful as it is for her now, imagine how frightened she would have been at the time. Also remember how few women feel safe and supported enough to report their own instances of sexual assault. According to RAINN, only 310 out of every 1,000 sexual assaults are reported. And of those reports, only six perpetrators will be incarcerated. It should come as no surprise to any reasonable person that Dr. Christine Blasey Ford didn't report her sexual assault at the time; to be honest, it would have been more surprising if she had.

What does come as a shock, however, is the President of the United States openly attacking an alleged sexual assault victim on social media. Dark days, indeed.