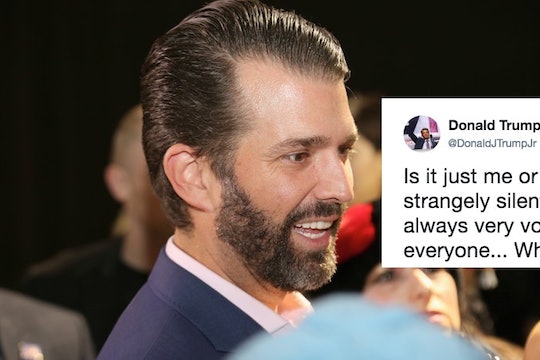 Donald Trump Jr. Weighed In On The College Admissions Scandal & Twitter Hit Back

When news first hit of the college admissions scandal revealed by the FBI on Tuesday, almost everyone was pretty horrified. Parents of hardworking kids who were now faced with potential evidence that their own children might not get a fair chance to enter the college of their choice, lining up instead behind the children of wealthy parents. Even Donald Trump Jr. weighed in on the college admissions scandal, and Twitter very quickly hit back at his criticism.

On Tuesday, Feb. 12, the Department of Justice revealed a massive college admissions scheme involving more than 40 wealthy parents who were allegedly using bribery and fraud to get their kids into elite schools like Yale and the University of Southern California, according to the The New Yorker. CNN reported that the parents involved in the alleged scandal, which was dubbed "Operation Varsity Blues" by the FBI, were accused of cheating on entrance exams, using the disability provision to gain more time on the SATs, and fabricating their children's involvement in varsity activities.

Some of those parents charged by the FBI included two actresses, Fuller House's Lori Loughlin and Desperate Housewives' Felicity Huffman, according to NBC News. (Romper's request for comment from Huffman's rep was not immediately returned and a rep for Loughlin told Romper, "I don’t have any information at this time.")

And Donald Trump Jr. couldn't wait to mock Hollywood in general for the alleged behavior of these celebrities.

"Is it just me or is everyone in Hollywood strangely silent today? Come on guys you're always very vocal in forcing your opinions on everyone... What changed?" the POTUS' son tweeted.

It seems Trump Jr. has had a chip on his shoulder when it comes to the people of Hollywood he deems the "liberal elite" ever since his dad became the President of the United States and the people of Hollywood (plus a whole bunch of other cities all over the world he doesn't seem interested in) didn't immediately swoon at his feet, according to 22 Words.

Every so often he will share what he clearly considers to be a clever, sardonic tweet, and it almost never goes well. And this time was no exception.

Hollywood types and others took to Twitter to discuss how Donald Trump Jr. got into the University of Pennsylvania, while also noting the $1.4 million worth of donations his father reportedly gave to the university right around the time of his acceptance, according to The Daily Pennsylvanian.

Tim O'Brien, the author of the 2005 book TrumpNation: The Art Of Being The Donald, took the time to spell things out for Trump Jr. about why he probably should avoid debates about reports of rich kids getting into school because of their parents' money.

This college admissions scandal is messy and people, especially parents, are clearly very upset by the whole ordeal. More will likely be revealed as time goes go on, but Twitter seems to agree that Donald Trump Jr. should keep his two cents out of the controversy.