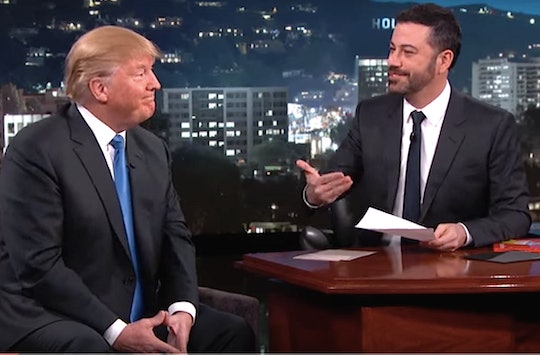 Donald Trump On 'Jimmy Kimmel' Proves, Yet Again, That He's Quite An Entertainer — VIDEO

One night after he appeared on CNN for the Fifth GOP Debate, Donald Trump was on Jimmy Kimmel Live, where the host grilled The Donald on how if elected (yikes!) he'd be the healthiest president ever. With his appearance on Kimmel, Donald Trump proves he's quite the entertainer. One night after he was booed and heckled in Las Vegas, Trump made it his mission to get into the living rooms of Americans everywhere by flying to L.A. for an appearance on Jimmy Kimmel Wednesday night, Dec. 16.

From the teaser video released before the show's Wednesday night broadcast, it was clear the interview would consist of the two going back-and-forth on all kinds of issues, including Trump's personal doctor. In a recently released (and might I add, odd) medical report, Trump's doctor reported that Trump will be the healthiest president ever — and Kimmel took him to task for it. As Kimmel read the report aloud, waxing poetic about The Donald's super stamina, Trump flexed his big guns (nope, not talking about carpeting bombing — he still hasn't revealed how he plans to defeat ISIS — I'm talking about flexing his muscles) and then looked to the audience for a laugh. Kimmel then asked, “How do you get a doctor to write something?” Trump's reply:

I said, doc, I want to tell you, I will be the healthiest president ever. And he said, hmmm. I think I agree. And I think he probably took my words and put them down.

FYI, this is a picture of Trump's doctor (Kimmel printed out a Facebook pic of the physician) who looks like he belongs in the cast of Inherent Vice.

Here's a teaser clip from the Kimmel/Trump interview.

Another highlight from the interview is Kimmel's remark about a Trump/Jeb Bush reality show. “My biggest take-away from last night is that, whoever wins the election, we need to force Jeb Bush and Donald Trump to live in a house together with cameras on them 24/7.” Now, that would make quite the reality show, don't you think?