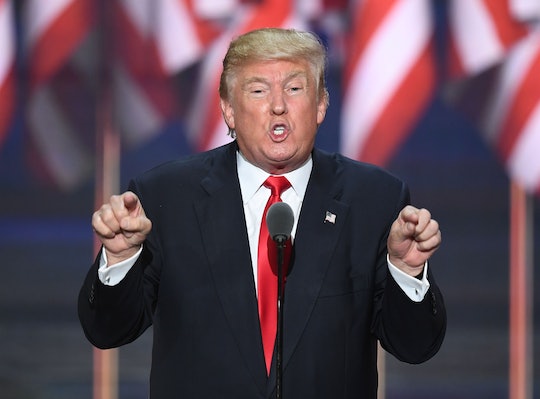 In his speech accepting the Republican nomination on the final night of the Republican National Convention Thursday, Donald Trump said the letters "LGBTQ" very slowly, and the audience definitely noticed. Viewers took to Twitter immediately pointing out Trump's bizarre cadence when it came time to speak the abbreviation commonly used for lesbian, gay, bisexual, transgender, and queer people. It's possible, of course, that Trump slowed down his delivery just to make sure he got the abbreviation right; after all, this was probably the most important speech of his life to date. Why not get everything, but especially the single passage focusing on gay people, right?

According to a draft of the speech obtained by Politico earlier Thursday, the passage in which the abbreviation appeared twice read:

Only weeks ago, in Orlando, Florida, 49 wonderful Americans were savagely murdered by an Islamic terrorist. This time, the terrorist targeted our LGBT community. As your President, I will do everything in my power to protect our LGBT citizens from the violence and oppression of a hateful foreign ideology.

Trump may also have slowed down because he was adding the "Q," which didn't appear in the draft. Still, people noticed and took the slowdown as an indication of either a lack of familiarity with the term or discomfort with it:

Twitter users also pointed out that violence against LGBTQ people is as common in the U.S. as elsewhere:

encouraged by beliefs like those expressed in the Republican party's newly adopted platform, which supports discrimination against gay people.

Trump, a New Yorker, was actually the most LGBT-friendly of all of the candidates in the 2016 Republican primary field and possibly the most gay-friendly Republican candidate ever, according to MSNBC. Trump also made a point, when delegates cheered in response to the LGBTQ paragraph of his speech, to thank the crowd for their positive response, and his adult children nodded in the audience.

Still, Twitter users were not encouraged by the difficult Trump seemed to have getting the letters out, as though he had never said them before. It's hard to convince LGBTQ people that you care about their safety when you have trouble naming them and are the nominee of a party who would strip them of their rights.