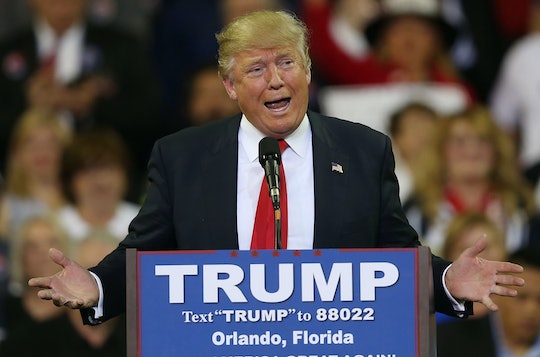 Is this real life? Seriously, is this real life, guys?! Please tell me it's not. Because I cannot imagine that this actually happened in actual real life. Presidential candidate Donald Trump led a rally of supporters in Orlando on Saturday, March 5, and, in typical fashion for the most controversial character of this election cycle, Trump asked them to pledge allegiance to him by raising their right hand. Yep, you read that right. He asked them to pledge allegiance. No wonder Louis C.K. is so afraid of him.

So how exactly did that go down? Well, Trump was certainly not shy about asking for the support of his voters. According to reports, during his rally, everyone in attendance heard Trump poll the room for those who would agree to follow him.

“Let’s do a pledge. Who likes me in this room?” Trump asked the crowd at the political rally in Florida. Shudder.

Of course, there were protesters in attendance, too (and why wouldn't there be, considering how close to the GOP nomination the former Celebrity Apprentice reality TV star actually is), but they didn't stop him from doing his thing. “I’ve never done this before. Can I have a pledge? A swearing? Raise your right hand," he went on.

Next The Donald asked the crowd to repeat his words, and the whole thing was kind of creepy. “I do solemnly swear that I, no matter how I feel, no matter what the conditions, if there are hurricanes or whatever, will vote on or before the 12th for Donald J. Trump for president.”

Of course, the crowd cheered and repeated. Wait, did he really say that about hurricanes? Oh boy...

Trump supporters rolled with the whole hand gesture thing, though. Most of them raised their right hands up, probably not really aware of the consequences they just signed up for if they don't really vote for him.

“Thank you. Now I know. Don’t forget you all raised your hands. You swore. Bad things happen if you don’t live up to what you just did,” he said, then kept talking.

This isn't the first time (or last time, we're sure) that something crazy has gone down on the Republican presidential candidate side. Just a few days ago Fox News hosted a debate, and the candidates totally didn't even mention any women related issues. You can read more about that, here.

Ed. Note: An earlier version of this story did not properly cite a Slate post on Trump's pledge. Romper regrets the error.