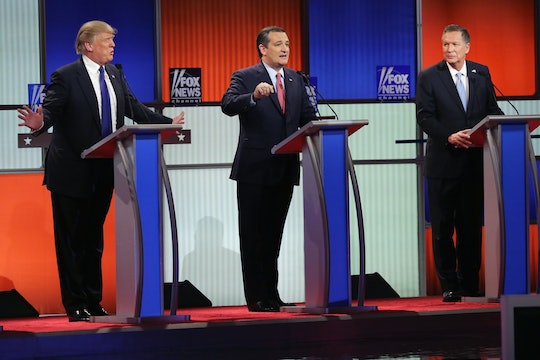 Who runs the world these days? Girls! Duh. Well, that's according to Beyoncé, of course. But that didn't seem to mean anything to the candidates at the Fox News GOP presidential debate in Detroit, Michigan Thursday night. Presidential hopefuls Donald Trump, Marco Rubio, Ted Cruz and John Kasich seemed to touch every topic out there during their discussions, even comparing their d-sizes, and bashing each other like crazy, but none of them talked about women's issues. What the hell?

The men started off the debate bullying one another (shocker), and with Trump going on and on defending the size of his hands (and by extension, his penis). Seriously. But the one thing we tuned in for, women's issues discussions, seemed to be axed from the entire program. Maybe they were too afraid to talk about that stuff, girls?

The candidates made sure to bash Democratic presidential candidate Hillary Clinton like no other, that's for sure. She seemed to be the biggest target of the night, but they never used her sex against her. Trump was even super nice to his enemy Fox News anchor Megyn Kelly when she asked him a question about flip-flopping on issues in the past. Phew.

When Kelly got her first shot at Trump, she greeted him with a smile, opening a friendly exchange. “How ya doing?” she said. “Nice to be with you, Megyn,” Trump responded.

“Great to have you here,” she added. Trump continued, “You are looking well.” She finished, “As are you.” You could cut the awkwardness with a knife.

The anchor then asked Trump a question about immigration that put him on the spot. Don't worry, that talk didn't go down like the "period" and "hog" one they had a few months ago. Remember when she called out his alleged women-hating ways during that whole argument? That lead him to not show up at a previous debate... Oh, the drama.

So why did the men not discuss anything about their female voters at the debate this time around? No ideas for Planned Parenthood funding? What about abortions? Equal pay rights?

While most things female were ignored during the GOP debate, people still tuned in. Social media was on point, like always, and looked past the cray-cray-ness of the whole thing. Twitter users seemed to find humor in the event. And a group of dabbers even managed to steal the show. It seemed like the evening had everything. But women's rights? Nope. Definitely absent.

Maybe the Democrats won't forget about us. All of us women can only hope.