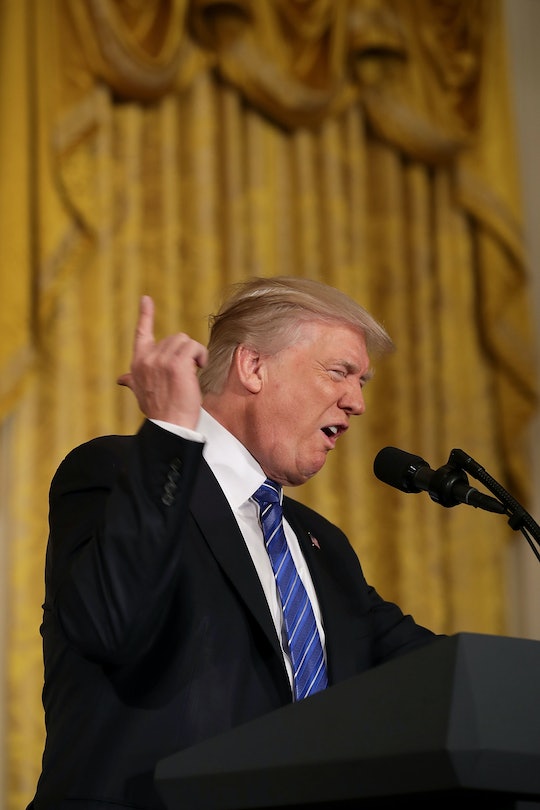 Donald Trump Wants "Better" Health Care — But Not For My Child

This morning, I diligently made my morning calls to the moderate Republican Senators who are wavering on voting for the Senate’s version of the healthcare reform bill, the Better Care Reconciliation Act (BCRA). The BCRA is the Senate counterpart to the Congressional healthcare bill, the American Health Care Act (AHCA), that proposed significant cuts to Medicaid last month. Although President Donald Trump had previously promised not to cut Medicaid, the BRCA cuts even deeper into Medicaid funding.

Many of my phone calls went straight to full voicemail boxes, although I was able to leave several messages saying: “Hello, I am calling to express my deep concern regarding the proposed healthcare legislation. I am the mother of a 6-year-old child who is severely medically complex and relies on supplemental Medicaid to live safely at home...”

As I made my calls, all I thought about was the image of protesters outside of Mitch McConnell’s DC office last week. Over and over I see the video of a woman being lifted from her wheelchair by police, as she chants “No cuts to Medicaid!” Disabled individuals exercising their right to protest in our federal buildings were physical removed, their embattled bodies literally dragged out of their wheelchairs.

This week, the BCRA is chugging along toward being made law. Yet I can't stop thinking about this moment, because it is such a striking visual metaphor for the stance toward people with disabilities as it is laid out in the BCRA: That people with disabilities are a hindrance to be moved out of the way quickly, before anyone notices how little care has been given to them in this legislation.

And so far, that plan seems to be working. Because even though the lives of my daughter and children like her are currently on the line, right now my inbox is filled with requests for me to write about Beyoncé's twins and Despicable Me 3.

I realize that people need distractions from the relentlessly churning, relentlessly depressing news cycle. I also realize that taking your kids to see Despicable Me 3 does not necessarily negate an interest in more serious issues, like the Senate putting this health care bill to a vote. Yet as the mother of a special needs child and an activist, I feel like I keep hitting my head against the wall trying to get people to realize why this bill matters.

So let’s talk for a minute about why I am jumping up and down trying to get people to pay attention to this bill, instead of being distracted by President Trump's most recent incoherent tweet.

First, this bill is something that every single American should be worried about right this minute, because it is about to go to a vote. According to the Congressional Budget Office, it will result in 22 million fewer Americans with healthcare by 2026. It is so drastic that the American Medical Association, the biggest doctors' lobby in the United States, has made a statement saying the BCRA violates the “first, do no harm” standard that is central to practicing medicine.

For me, my daughter, and many other Americans, this bill is downright dangerous, because it is predicated on a massive cut to Medicaid by $770 billion over 10 years. These deep cuts amount to 25% of Medicaid funding, going even further than the original congressional bill, which even Donald Trump has referred to as “mean.”

So where will these cuts come from? They will come from states reducing enrollment and services — meaning fewer people will get fewer services, like those my daughter relies on to keep her safely living at home.

As I go about life with my daughter Esmé, we are regularly shown that we take up too much space, that it is exhausting for other people to have to think about disabled children.

My daughter Esmé’s Medicaid coverage is through what is known as a Medicaid waiver, supplemental Medicaid coverage, or Katie Beckett insurance (so named for the medically complex child whose mother's activism convinced President Reagan of the need for these programs). Medicaid covers only the services our private insurance doesn’t cover, like in-home nursing care, medical equipment, and copays. These Medicaid programs are not mandated and they are run state-by-state, meaning that while some states have good waiver programs, other states have limited programs or lengthy waiting lists, like Florida’s current seven-year-long list. Other states do not have programs at all.

For middle-class families caring for disabled children, such programs can have an enormous effect on their economic stability. They can be the difference between a child being institutionalized or remaining in her community. They are, however, very costly programs, and since they are optional, as cuts begin to state Medicaid funding, they are likely to be some of the first programs cut, which will likely directly harm the health and safety of Esmé and others like her.

The truth that my daughter and others like her will help pay for this bill with their health. The media doesn't want you to realize that. They would rather cover Trump's tweets about “Crooked Hillary," or whether Eric Trump’s new haircut looks like that of a white nationalist. But it is the truth.

In some ways, it shouldn’t be surprising that so many people are turning a blind eye to the effects of this bill. As I go about my life with my daughter Esmé, we are regularly shown that we take up too much space, that it is exhausting for other people to have to think about disabled children. I hear it from the woman who tried to block us from using the accessible bathroom stall. And the woman who screamed obscenities at me for asking her not to idle in an accessible parking spot outside of Esmé’s school. And the woman who commented on a link to one of my articles about healthcare by saying: “Sorry about your daughter, but this is a Republic not a Socialist State!”

At this moment, I see a country having a debate over a bill that, at its core, questions my daughter’s right to exist, to utilize resources. And it seems so easy for people who aren’t directly affected by this legislation to just quietly look the other way. Such is, I am told, the nature of our news cycle: Oh, look, bodies of disabled people being dragged out of our Senate building in protest of the dismantling of their healthcare — and over here? A video of a dog dancing on his hind legs! And here? A game of guess the FAKE NEWS!

I can’t afford to not think about healthcare. And here’s the thing: You can't, either. We are all just all just a car accident or genetic fluke or cruel disease away from being a person who needs the same resources that my daughter does.

This healthcare bill is not about partisanship, as some Republican Senators like Senator Susan Collins, who announced her opposition to the bill last night, have thankfully realized. As my dear friend center right-leaning friend told me last week: "This isn't a political issue, it is a humanitarian one." This debate is about whether our most vulnerable American citizens deserve healthcare. It's about whether they deserve to live with their families and in their communities. It's about whether they deserve to live. This debate is about real lives — including my daughter's life.

Believe me, I’d rather be listening to Beyoncé and mixing a stiff drink right about now. But I can’t afford to not think about healthcare. And here’s the thing: You can't, either. We are all just all just a car accident or fluke of genetic science or cruel disease away from being a person who needs the same resources that my daughter does.

When I watch those brave protesters being manhandled by the police, I also see my child, who has fought so hard just to be able to survive in this world. I see myself, who will put myself on the line for my child. I see what some of us live every day: the struggle to prove that the lives of disabled individuals are worthy, are meaningful. It is a struggle that many of us go through, all while fighting battles within our bodies and/or the bodies of our loved ones.

And I am afraid that I feel too many of my fellow Americans turning away from this reality. And, as a result, speaking as a mother who has come unspeakably close to having her child almost die in her arms, I can tell you that I have never felt more afraid of my child’s future than I do right now.