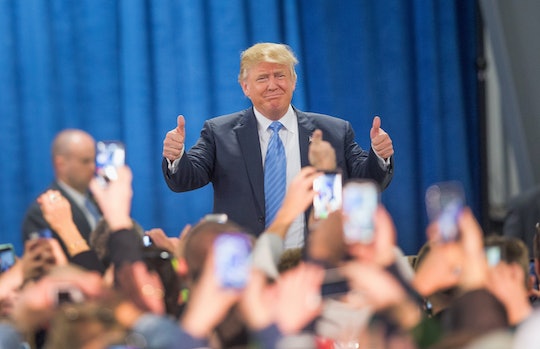 Donald Trump Wants To Ban Muslims, & Here Are All The People Who Turned On Him Today

Donald Trump is not having a good day, and he really has no one to blame but himself. After Trump said that we should ban all Muslims from entering the U.S., even people who had previously remained neutral on Trump's candidacy turned on him. Important people. People from his own party, like the RNC Chairman and Paul Ryan. Mayors all the way from the East Coast to London are denouncing the candidate. Even J.K. Rowling got in on denouncing the candidate who pronounced that we should ban all Muslims from the country and that European capitals are too scared to police their own cities after the Paris terrorist attacks in November.

He spent most of Tuesday defending himself and his statements, which only seemed to do more damage. And Trump can't afford that right now. Before yesterday's statements, a new poll showed that Senator Ted Cruz had inched up over Trump in Iowa.

Trump spent the day parading himself around trying to prove himself right, which only dug him into a deeper hole. Exhibit A: He clarified on ABC that he would allow Muslims who traveled overseas to come back from vacation. "They’re a citizen. That’s different. But we have to figure things out.”

At this point his friends are few and far between. [Sen. Cruz offered some faint praise, saying today in a press conference that while he doesn't agree with Trump's details, he's alright with the concept. He said, "I commend Donald Trump for standing up and focusing America’s attention on the need to secure our borders." Rick Santorum also somewhat agrees with Trump saying on Sirius XM Radio's Breitbart News Daily that, "I’ve proposed actual concrete things and immigration law that would have — not the effect of banning all Muslims, but a lot of them because we need to get rid of the visa lottery system, which is the way in which a lot of radicals have come into this country."

But that's about it. Today, Trump made a lot of enemies. Here are some of the people who turned on Donald Trump today: