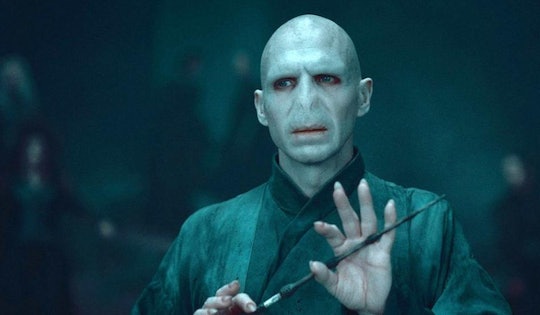 Is Donald Trump Worse Than Voldemort? J.K. Rowling Weighed In, So We Did Too

If this is the first corner of the internet you’ve visited this week, let me be the first to tell you that Republican presidential hopeful and noted hair-wearer Donald Trump called for a ban on Muslims entering the U.S. in a press release on Monday. The most obvious conclusion would be to compare him to Hitler, of course, but comparing people to Hitler on the internet is so clichéd. I mean, there’s been a saying about it since 1990. So the good people of Twitter have gone one better, and started comparing Trump to Voldemort.

Some are hoping that if we avoid saying Trump’s name, and convince the Daily Prophet — that is, the media — to stop talking about him, he’ll eventually be defeated by a boy wizard. (I hope I didn’t just spoil Harry Potter and the Deathly Hallows for you, but honestly, why haven't you read it by now? Get yourself together.) Others are wondering if Trump has somehow solidified his power by splitting his soul into pieces and hiding them in horcruxes (the first of which would, of course, be that hair). Hell, the New York Daily News is even asking its readers who’s scarier, Trump or Voldemort. Why not ask an expert? Harry Potter author and certified Twitter wizard J.K. Rowling weighed in on the Trump/Voldemort comparison herself on Tuesday morning:

BRB, flying to Scotland to high-five her. So just how similar are these two evil dudes? Let's compare and contrast. (If you haven't read all the books and seen all the movies, I feel bad for you, son... and also, you're about to read some SPOILERS.)