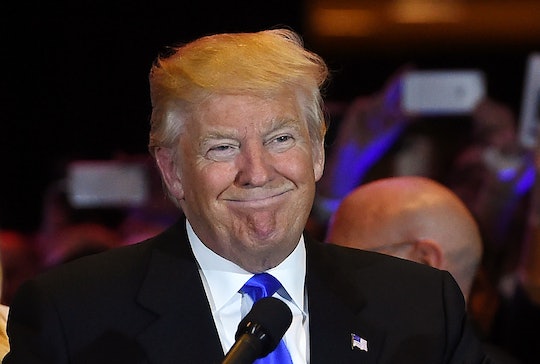 Ever wonder what Donald Trump really thinks about the Hispanic population? Yes, yes, we know what you've read... The Wall, the questionable immigration policy et al. But it's possible we were all seriously underestimating just how awful his stances really were. Just check out Donald Trump's Cinco de Mayo tweet and realize with me how much trouble were all in.

Trump, who has become the presumptive Republican presidential candidate since Ted Cruz and John Kasich both suspended their campaigns earlier in the week, has not precisely been known as a friend to the Latino community so far in his campaign. One of his most famous (and polarizing) campaign platforms has been his promise to sanction the building of a wall to keep out Mexican immigrants. But don't worry, he's planning on "making the Mexicans" pay for the wall to keep themselves out, I guess. He has, at times, referred to Latinos as "rapists" and "killers", mocked former presidential candidate Jeb Bush on Twitter for being married to a Meican woman; but it's ok now, guys. Trump tweeted a picture of himself eating a taco bowl in Trump Tower (who apparently make the "best taco bowls", no surprise there) with the caption "I love Hispanics!".

So... yeah, that happened. It would be hilarious if it wasn't actually deeply troubling. The fact that Trump has spent the majority of his campaign being openly racist against the Hispanic community and now assumes all will be well with this (let's face it) disturbing picture of him eating out of a fairly mediocre looking taco bowl is beyond ridiculous. This is simply further proof that he has lost touch with reality, that he truly seems to believe he can wipe the slate clean every day with a weird tweet and some guacamole. And let's not even get started on that smile.

Just so we all aren't hypnotized by the mesmerizing sight of Trump and his lunch, here are a few choice Trump quotes to remind us what he was saying, pre-taco bowl.

Provided "evidence" that Mexicans are rapists

During a phone interview with CNN's The Situation Room, Trump defended his earlier claim with (what he called) the facts;

He blamed the majority of crime on Blacks and Hispanics

Trump seems to have lost all sense of proportion. If he truly thinks that eating out of a taco bowl with a terrifying grin and claiming to love Hispanics will erase the monumental amount of damage he has done... what else is there to say?