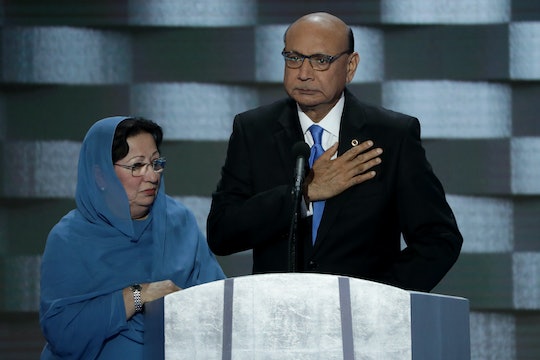 Yesterday, my brother was deployed. He boarded a plane to a place I'm not allowed to know, for period of time I'm not allowed to know, on a numbered tour I've lost count of because, yes, there have been that many. Yesterday I sat on the floor of my living room, reading coverage of Donald Trump's latest outburst, filled with rage. Donald Trump's criticism of Khizr and Ghazala Khan reveal his biggest flaw, and while Trump has engaged in a back-and-forth of insults, my brother was deployed — again — and there's nothing I can do about any of it. I can't keep my brother, who serves as a Marine, from doing what he knows and believes is right, and I can't keep Donald Trump from feeling that the sacrifices my brother, and those like him, make are the same as the sacrifices he makes when he signs business documents from the comfort of his office.

I watched the Democratic National Convention (DNC) last week, hopeful about the outcome of easily the most contentious and bizarre election season this country has ever seen. I was in awe of First Lady Michelle Obama, felt chills when Vice President Joe Biden took the stage, and was incapable of forming complete sentences when Rev. William Barber brought down the proverbial house. However, it was Khizr and Ghazala Khan, parents of a Muslim-American soldier killed in a suicide car bombing in Iraq in 2004, who left me in tears. Though I have a brother who's deployed right now, I am thankful I haven't faced the blatant persecution and dangerous, bigoted rhetoric the Khans face day in and day out because of their religion. I do, however, know what it feels like to have someone you love risking their lives for our national security. I can understand the constant anxiety and fear they no doubt felt standing by someone they loved, someone they would do anything for, during his deployment, as he offered up everything he had to serve the needs of our country.

On the very public stage of the DNC, in front of millions watching, the Khans spoke proudly of their son's sacrifice — of his ultimate sacrifice. They reminded us all what Americans in the armed forces fight for. As the sister of a Marine, I shared their pride.

My sister-in-law and my mother do not know Ghazala Khan's pain. They don't know what it means to be a Gold Star mother. They don't know what it's like to have armed men fold a flag in front of you and place it in your arms. But in Khizr Khan's speech and in his wife's op-ed published in The Washington Post, I heard their words as if they were spoken directly to me. I heard the words of two parents who know the greatest grief a parent faces. But even in their pain, I felt something else. The Khans made clear that they remain steadfast and unwavering and sure in their faith in America. In their hope. Their trust. ‌

Donald Trump doesn't know what it's like to hug your loved one for, potentially, the very last time.

In an interview with ABC News' George Stephanopolous, Trump claimed that, like Army Capt. Humayum Khan, he has "made a lot of sacrifices," most notably that he works "very, very hard." Trump equated working in an office in some sky-high building etched in his last name to dying in a field of combat. He went on to say, "I've had tremendous success. I think I've done a lot," because, to Trump, being successful and making money is the equivalent of "sacrificing something for your country." But his sacrifice is not the same as Khizr Khan's. It is not the same as Ghazala Khan's. It is certainly not the same as any military family's.

He does not know because he has never given these things — these horrible, wonderful, painful, necessary things — up for his country.

In this specific context, Donald Trump doesn't know what it's like to hug your loved one for, potentially, the very last time. He doesn't know what it's like to turn on the news out of morbid curiosity, in absolute fear that a headline will announce your loved one's death. I've called my mother on more than one occasion, a lump in my throat and my palms sweaty with anxiety, asking her if she's heard from my brother yet, curious if she read about that one car bombing in that one area we knew he was in, or that one training accident we knew he could have been part of. I watch the news because I just have to know, but I'm simultaneously terrified of what that knowledge might bring.

Trump has never sacrificed his peace of mind, aware of the danger his loved one willingly, selflessly faces on a daily basis when they're deployed. While Trump attended New York Military Academy, he never served in the Armed Forces as an active duty military member. He was never deployed.

Trump doesn't know that my days are spent on a fulcrum of feelings: on one side, I am emboldened with pride, on the other, I wish more than anything that this was somebody else's job. But Donald Trump does not care how the scales tip.

At the beginning of my brother's service, when he was only 18 years old, I slept with my phone in my hand, gripping it tightly and pulling it close to my chest in case he'd call. I was afraid to miss a single ring, or that I'd get the phone call that told me my brother wasn't coming home. I was quick to answer when a call came through, yet there was always an initial, half-second pause. Could I handle the words? Could I live in a world where my brother no longer existed? Could I do what so many mothers, fathers, sisters, brothers, husbands, wives, and children are forced to do on a daily basis?

The most cutting line in Khan's speech highlights exactly what Donald Trump has given. He said, "You have sacrificed nothing and no one." He's right. Donald Trump does not understand what fathers and mothers like Khizr and Ghazala have given up. He does not know what my mother and my sister-in-law have sacrificed. He does not know because he has never given these things — these horrible, wonderful, painful, necessary things — up for his country.

While Trump sits in a swanky office cosseted by his indifference and delusion, I sit at work, distracted by the fact that my brother is, once again, putting himself squarely in harm's way. I'm constantly on the verge of tears because, for the first time in his military career, I didn't call to say goodbye. A sibling fight that, well, only siblings can have kept me from talking with him for far too long and, now, I know all too well that I run the risk of never being able to talk to him again. I may have made the biggest mistake of my life. I may have done something I'll regret. I may have lost the opportunity to tell my brother that I'm sorry, that the little things don't matter, and that my stubborn pride is worthless. I can't send him a tweet or call a press conference to apologize. I no longer have the opportunity to even stick my figurative foot in my mouth, a luxury Trump takes for granted on a daily basis.

Donald Trump doesn't know what it's like to wish your loved one wanted to do literally anything else than serve his country with his life. I daydream about my brother doing something menial, a job that isn't so dangerous and doesn't take him away from the ones who love him most. Trump doesn't know that my days are spent on a fulcrum of feelings: on one side, I am emboldened with pride, on the other, I wish more than anything that this was somebody else's job. But Donald Trump does not care how the scales tip.

But he is my brother. My mother's son. My sister-in-law's husband. He is a father to two beautiful little girls, an uncle to my own little boy. He is someone, like Capt. Humayun Khan was, to his family. I try to understand the bravery and sacrifice and selflessness — the qualities that make my brother who he is — and to understand the ultimate sacrifice servicemen and women like Capt. Humayun Khan have given. Over the years, I've asked myself if I could do what they do, if I could give what they give. I couldn't. I can't. That's probably why I never will, and that's definitely why Donald Trump never has.