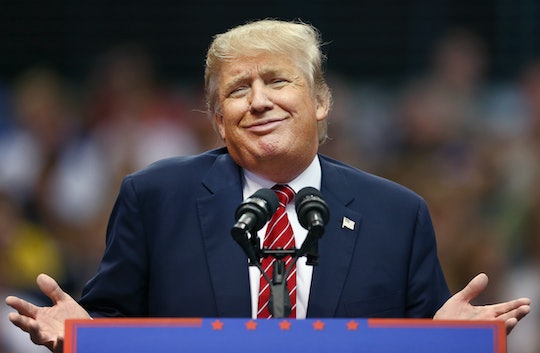 During the fifth GOP debate in Las Vegas, Nevada Tuesday night, there were a few quote-worthy moments, including the one when Donald Trump said he would shut down the Internet, proving that Donald Trump doesn't understand the Internet (among other things). During the CNN-hosted debate, in which Wolf Blitzer asked the nine hopeful Republican presidential candidates questions about ISIS, the war on radical Islamic terrorists, and their potential future policies, Donald Trump claimed that he would "shut down the Internet," a plan he has alluded to in the past, despite the fact that, well, the Internet just doesn't work that way.

I wanted to get brilliant people from Silicon Valley and other places and figure out a way that ISIS cannot do what they’re doing. You can talk freedom of speech, you can talk anything you want. I do not want them using our Internet.

Problem: It isn't just "our" internet, so keeping a group of people in a particular part of the world from using it isn't a thing.

We should be using our brilliant people, our most brilliant minds, to figure a way that ISIS cannot use the internet and then on second, we should be be able to penetrate the internet, and find out exactly where ISIS is and everything about ISIS and we can do that if we use our good people.

This isn't the first time Trump has made it painfully obvious that he doesn't understand how the internet works. On Dec. 7, Trump called for a "shutdown of the Internet."

Not sure if Donald Trump is aware that "closing the internet" is something totalitarian governments do. Or maybe he is well aware. I'm not sure which is worse.

More Like This
Reddit Had Tons Of Advice For Mom Whose Husband Finds Parenting “Painful”
The 20 Most Romantic Quotes From Friends
Sweet Valentine's Day Quotes
Freeze! The Single From The New 'Bluey' Album Just Dropped
What Parents Are Talking About — Delivered Straight To Your Inbox