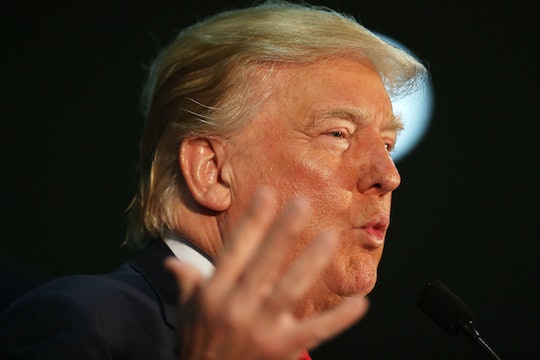 Donald Trump's Response To State Of The Union Was Completely Unsurprising

President Barack Obama delivered his final State of the Union address on Tuesday, Jan. 11, providing Congress and the American people with an overview of the last seven years of his presidency, and giving everyone an outlook on his hopeful vision for the future of the country. Of course, not everyone was delighted by the president's speech, including presidential hopeful and Republican front-runner Donald Trump. Trump's response to the State of the Union address on Twitter wasn't just brief, abrupt and unimpressed — it was downright obnoxious.

While Hillary Clinton tweeted out her support of President Obama and his final SOTU, Trump seemed anxious to let everyone know that he was seriously underwhelmed with the president's nearly hour-long speech. Tweeting out his 140-character disapproval, the Republican presidential candidate called the president's speech "really boring", "slow", "lethargic" and "very hard to watch". (How imaginative!)

Maybe the GOP front-runner just didn't think the president was a match for him in terms of inappropriateness. Perhaps it was Obama's refusal to spew racist, sexist and otherwise problematic statements during his speech, that left Trump wanting more from the two-term president. Who knows. What we do know is that Trump also used the opportunity to once again criticize the president's Iran deal, "calling it terrible" and claiming that Iran sent all of its "uranium stockpile" to Russia, to avoid handing it over to the United States. Trump did not, however, take the time to tweet out just how he knew all of that, or where he was getting his Iranian/Russian information.

By the end of the night, there were at least a few gems out of The Donald's Twitter account that provided us with some laughs, even if the GOP candidate was largely quiet. (Shocking, right?)