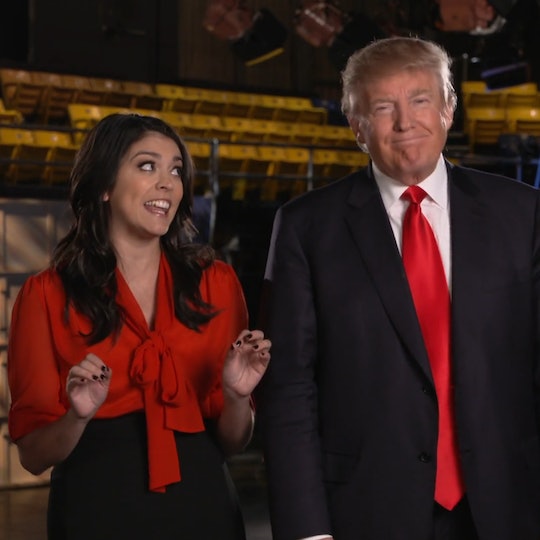 Donald Trump just hosted Saturday Night Live for the second time, and believe it or not, he wasn’t completely terrible. Trump's SNL monologue was, not shockingly, all about what a nice guy he is, and also about Rosie O'Donnell. As proof that he doesn't hold a grudge, he called out "Rosie" herself, Aidy Bryant, who reminded him that she's not actually Rosie. And for those waiting for a Trump parody, there were two. First Taran Killam came out to talk about how "great" and "fantastic" Trump is, and then we got a special treat: Announcer and former cast member Darrell Hammond reprised his role as Trump, being more critical and "firing" the real Trump.

As Trump prepared to wrap up, we heard someone shout, "You're a racist!" Was it a heckler? No, it was none other than Larry David, who arguably is a heckler anyway. "Trump's a racist!" he repeated, to a healthy amount of applause. When questioned by Trump, David explained, "I heard if I yelled that, they'd give me five thousand dollars." David was referencing a bounty offered by the activist group Deport Racism, who did, indeed, promise $5,000 cash to anyone who got on camera by yelling the phrase that pays. Trump responded, "As a businessman, I can fully respect that." Flanked by his two pouting doppelgangers, Trump wrapped up his monologue.

It was even better than his last monologue. Back in April of 2004, Trump hosted SNL to promote his then-new show, The Apprentice. He poked fun at his well-known overblown ego, remarking, “Nobody's bigger than me, nobody’s better than me. I’m a ratings machine.”

Certainly ratings were a big factor in this most recent hosting gig, although he did actually kind of bring it. Back when he was only there to sell himself as a reality show host, he had more leeway. “Television’s just a hobby for me,” he told the audience, “I’m primarily occupied with my real estate holdings, my best selling books, and making love to women who’ve won prizes for their beauty.”

Now that he’s a (presumably) serious candidate for POTUS, Saturday’s monologue called for a bit more decorum. Thankfully, he was still able to deliver a few laughs. Maybe that’s why he couldn’t deliver. Or maybe he’s just not that funny. I’m guessing it was the latter. Check out the 2004 monologue here and see if you think it stacks up. (Warning: There are some homophobic jokes that… well, they weren’t funny in 2004, either, but they were accepted. My, how times have changed.)