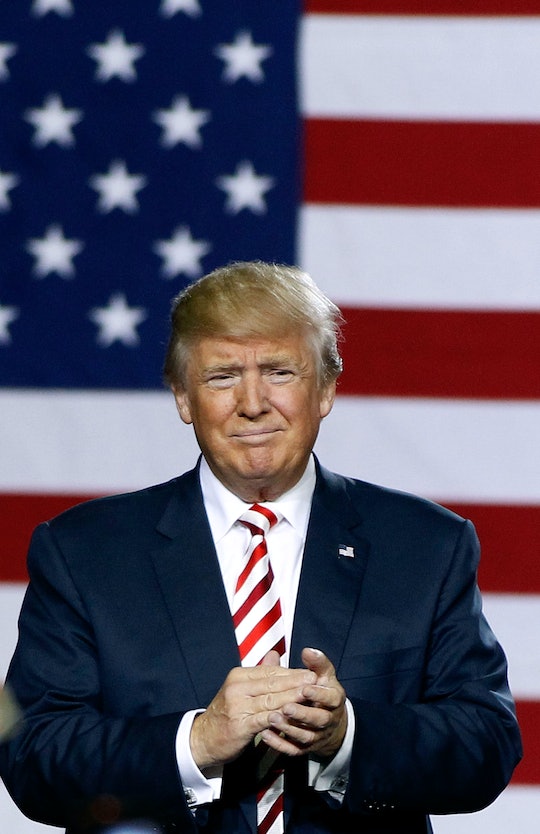 In the aftermath of Tuesday night's Vice Presidential debate between Indiana Gov. Mike Pence and Virginia Sen. Tim Kaine, everyone seems to be weighing in on how the two opponents fared. Did Clinton's running mate Kaine win the debate by highlighting presidential candidate Donald Trump's long litany of insults and faux pas? Did Pence, Trump's running mate, win by using a soft-as-kitten voice and smirking at the camera with his square cut jaw and clean shaven goodness? Well, Trump has weighed in, and believe it or not, declared his man Pence a resounding success. Trump also tweeted about Kaine's interrupting, which I suppose means he doesn't think it's polite in good company to interrupt anyone while they're speaking. Unless you're Trump, then we're good to go.

More Like This
Wait, Did The Government Actually Do Something For Parents?
Bindi Irwin Has Been Sharing The Cutest Photos Of Her Daughter
Everything You Need To Know About The Proud Family Reboot Coming To Disney+
A Volleyball Coach Wasn’t Allowed To Bring Her Breastfeeding Baby Into A Tournament

Kaine and Pence frequently spoke over each other at Tuesday night's debate held at Longwood University in Virginia; so frequently, in fact, that moderator, CBS News' Elaine Quijano admonished the two men (which I very much loved) by saying;

Gentlemen, the people at home cannot understand either one of you when you talk over each other.

She was right, we people at home couldn't understand either of them. Thank you, Elaine Quijano for thinking of us at home, even when both men were interrupting her and talking over her. Trump, on the other hand, only heard Kaine interrupting Pence. Which irked him to no end, guys.

Trump was also dismayed that Pence wasn't allowed to interrupt as much as Kaine, apparently. He called no-fairsies on that one.

Let's harken back to the first debate between Trump and Democratic candidate Hillary Clinton. I wonder how frequently Trump interrupted her when she was trying to speak? According to Vox, Trump interrupted Clinton a jaw-dropping 51 times. He spoke over her 25 times in the first 26 minutes of the debate. That's not including any of his condescending head shakes and frowns that were incredibly distracting and patronizing. How many times did Clinton try to speak over Trump to be heard? A measly 17 times.

Many of Trump's interruptions of Clinton were to challenge her facts with lies, like arguing that he had never said some of his most heinous quotes about women (such as calling women "pigs" or "dogs," for example). At one point, he even employed my favorite retort from sixth grade: "Not."

Perhaps it's unfair to insinuate in any way that Trump felt justified interrupting Clinton because she is a woman.

The simple reality is, Trump had no problem interrupting his opponent during a debate. He has a long history of interrupting everyone, even people who are "on his side" as it were. So for him to call Kaine out for doing the same thing (while being equally interrupted by Pence), is seriously hypocritical.

And, sadly, not all that surprising.