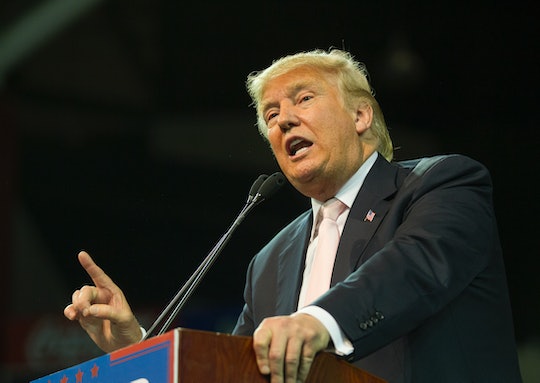 Republican presidential candidate Donald Trump has been enjoying victory after victory in the primaries and caucuses so far, so Super Tuesday is bound to be an exciting night for him and his team. Lucky for all of us, when things start to heat up, the candidate starts to get mouthy. And Donald Trump's tweets during Super Tuesday were awkwardly hilarious (just as everyone expected them to be, thank goodness), if only because they weren't all that crazy.

Whether or not you're a Trump supporter, his Twitter timeline is always the best source to gauge what the candidate's thinking about, fighting for, fighting against, or who his next target might be. Donald Trump loves Twitter just as much as the next guy without a hotel empire or a private jet. Even better, he's one of those celebrity accounts where you just know it's the man himself at the keyboard. You can't make his tweets up.

On Super Tuesday, Trump was up early, retweeting endorsements from voting state politicians and posting pictures of rallies in states like Georgia and Ohio. He also continued his feud with South Carolina Gov. Nikki Haley who has endorsed Florida Sen. Marco Rubio in the primary, tweeting "The people of South Carolina are embarrassed by Nikki Haley!" After that it was all back to business about turning out the vote. It's like Kanye West's timeline, but even more inconsistent.

Of course, his campaign slogan.

And then thanking the various states for voting for him.

Even after Sen. Ted Cruz called him out during his speech and after taking state after state on Super Tuesday, Trump was actually semi-calm on social media during the votes. Wednesday morning? That's a whole different story.