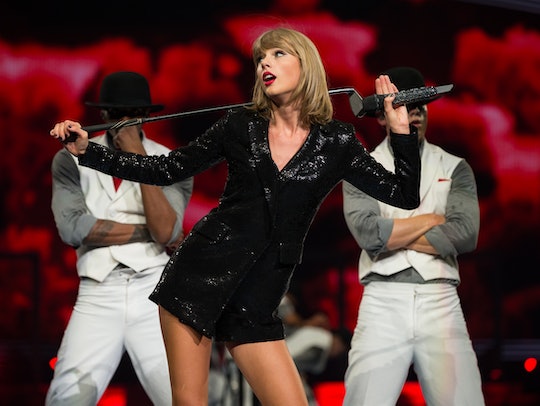 Before the backdrop of a very public spat with Kanye West and questions about her political affiliations, America's onetime country music-turned-pop starlet Taylor Swift has experienced a dramatic fall from grace in recent years. And she' been hard at work to remake herself ever since, even going as far as to inform listeners that the "old Taylor" is dead in the recent single "Look What You Make Me Do." Now, her aptly titled new album Reputation is finally here, the track "Don't Blame Me" is picking up right where "LWYMMD" left off. It continues to introduce the new, but not necessarily improved, Taylor to her, in some cases, disenchanted fandom. In fact, you could even make the argument that "Don't Blame Me" is the clapback anthem Taylor Swift needs to reclaim her reputation.

Swift's very public feud with Kanye West and Kim Kardashian over whether she OK'd some choice lyrics for his song "Famous" had many of her detractors slamming her for dishonesty and for constantly playing the victim last summer. And it continued when she remained silent about President Donald Trump when many celebrities were speaking out against him fueled suspicions that she may have actually supported him. Those unflattering narratives predictably earned her some unflattering headlines, leaving Swift seemingly desperate for a reinvention.

In deleting all her social media posts, killing off the old Taylor, and assuming a darker sounds and aesthetic in her news songs and videos, Swift is clearly working toward that goal.

But she has no intention of taking it all lying down. Whether she's the old Taylor or the new one, Swift is a savvy businesswoman and appears to pride herself on being in control. With "Don't Blame Me," it's not immediately obvious who she's talking about — whether it be the media, as one theory goes, or West — but what does come across is that Swift has no intention of letting the current unflattering narrative about her life steamroll her.

In the song, as well as others in Reputation, she's saying her peace. So, with "Don't Blame Me," Swift shows that she's retaining her roots of singing about guys, too, no matter what controversy swirls around her:

Of course, it hasn't escaped some Swift-watchers that, in the official album track list, "Don't Blame Me" follows right after "I Did Something Bad." For a women who is more more or less constantly dogged by accusations of positioning herself as the victim whenever it's profitable or convenient, this may not be the very best choice from a PR standpoint. Still, there's something perversely striking about Swift's apparent disregard for what people are saying about her with the song placement, all within an album that is uniquely — perhaps even solely — concerned with what people are saying about her.

Whether you love Taylor Swift or hate her, it's impossible to deny that she has that something that just keeps people talking about her and streaming her music at record rates. There no doubt that "Don't Blame Me" and the rest of Reputation will spawn a thousands think pieces in the coming days, but all those Swifties out there will probably also appreciate it for what it is on its surface: a classic Swift song about love and relationships, meant to be blasted over and over on repeat as you drive with the windows rolled down.