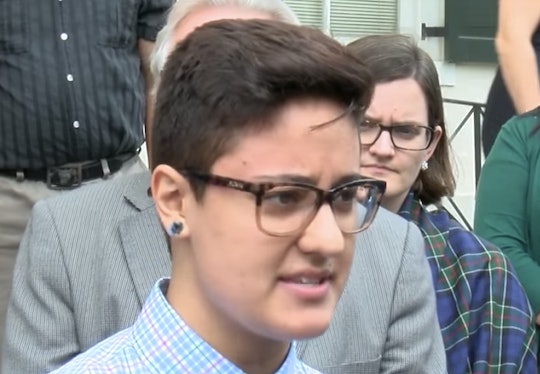 "Dreamer" Detained By ICE May Not Get Hearing

Daniela Vargas was just 7 years old when she arrived in the United States as an undocumented immigrant from Argentina. The only country she truly knows, indeed the only country she calls home, is the United States. Despite her DACA status, "Dreamer" Daniela Vargas was detained by ICE officials this week and could potentially be deported without a hearing.

Vargas held a press conference in Jackson, Mississippi, in support of undocumented immigrants on Wednesday. As part of DACA (the Deferred Action for Children's Arrival program — whose recipients are called "Dreamers"), which was created under former President Barack Obama's administration, Vargas should have qualified for a temporary reprieve from deportation, as long as certain requirements were met (those included not being convicted of a felony, having graduated high school, and being under 31 years old). According to The Hill, after her press conference on the steps of the Jackson City Hall, Vargas was reportedly driving away with a friend when she was apprehended by ICE officials and detained.

The Huffington Post reported that Vargas' DACA status technically expired last November, and it took her until February to save up the $495 to pay for the renewal. ICE officials initially said through a spokesperson on Wednesday that Vargas would be allowed to go through court to apply for relief. However Abby Petersen, the attorney who is representing Vargas, said she had been informed that ICE would be pursuing her immediate deportation because her family had entered the country through the visa waiver program.

The visa waiver program meant that Vargas' parents waived some of their rights, but Petersen argued that Vargas was too young to make that choice for herself when she entered the country:

She was 7 years old at the time [she came to the United States]. She didn’t waive those rights, her parents waived those rights. And now she’s an adult trying to assert her own rights.

During her press conference, Vargas pointed out that she had dreams of being a university math professor, but that her dream might not happen for her or other law-abiding, hard working immigrants like her father and brother, who were both previously detained:

The path to citizenship is necessary for DACA recipients but also for the other 11 million undocumented people with dreams. Today, my father and brother await deportation, while I continue to fight this battle as a DREAMer to help contribute to this country, which I feel that is very much my country.

President Donald Trump has issued several executive orders targeting immigrants since his inauguration, but DACA members were identified as an excluded group from those orders. And yet, Vargas was reportedly threatened in her home in Jackson when her father was arrested. Bill Chandler, executive director of the Mississippi Immigrants Rights Alliance who was at the scene standing vigil, told CNN that Vargas was forced to hide inside her home for hours from ICE officials outside her door:

We stood vigil outside of the house for about five hours. ICE was trying to persuade Daniela to come out of the house. Of course, she refused. They went and got a search warrant. ... Then they decided to break into the house and confront her.

She was able to convince them that she was a DACA member, and ICE left. According to Chandler, Vargas chose to hold a press conference because "she thought it might protect her." Apparently not; Vargas was taken to a detention center in Louisiana, where her fate looks grim. All because she spoke up and spoke out. Vargas released this statement through her lawyer, which gives some indication of the sort of person being asked to leave the country:

I don’t understand why they don’t want me. I’m doing the best I can. I mean I can’t help that I was brought here but I don’t know anything else besides being here and I didn’t realize that until I was in a holding cell last night for 5 hours. I was brought here. I didn’t choose to be here. And when I was brought here, I had to learn a whole new country and leave behind the one that I did know. And I barely knew that one.

I feel, I strongly feel that I belong here and I strongly feel that I should be given a chance to be here and do something good and work in this economy. There’s so much that I can bring to the table, so much, like I can even teach music, I’m an excellent trumpet player you can ask my mom about any of that. I’m great with math, I speak Spanish. You know, there’s a lot of stuff that I can do for this country that they’re not allowing me to do. I’ve even tried to join the military, and I can’t do that. But, I mean that’s not the point, the whole point is that I would do anything for this country.