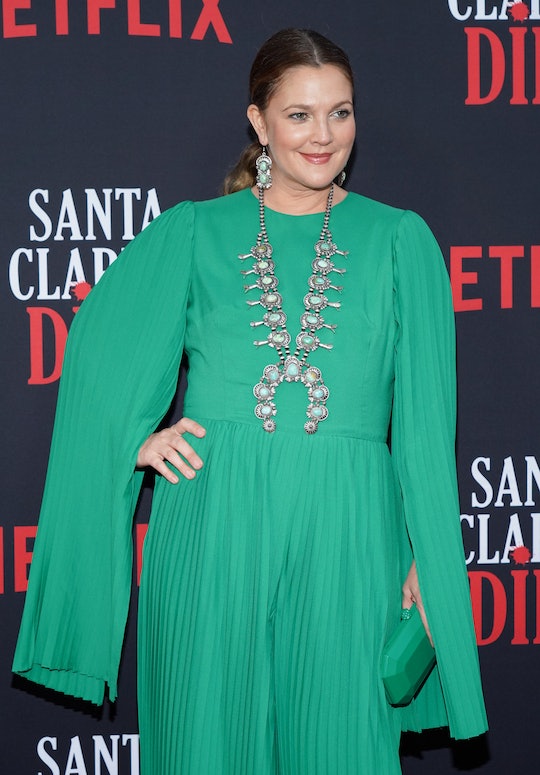 There was a time when Drew Barrymore was all about those sweet, sweet romantic comedies. A time when you couldn't really go more than a month or so without seeing her sweet little face lighting up the screen and making everyone fall in love with her. It was a pretty great time, but, unfortunately it was before she had her two little girls so they weren't around to enjoy it. But don't worry about it, they're finding their way around that particular hurdle because Drew Barrymore says her daughters like her movies and this brings me joy.

Although that being said, Barrymore's two daughters, 6-year-old Olive and 5-year-old Frankie, aren't necessarily into watching everything their mother has ever acted in. When you think that the 44-year-old actress has been in the film industry for nearly four decades — she was just 7 when she appeared in E.T., as Biography noted — that's a lot of ground to cover for two little girls. And they apparently already have a few favorite gems they like watching, even if Barrymore did tell Good Morning America during an interview on Tuesday that she doesn't exactly encourage her daughters to sit down and watch her movies. It's just one of those things that happens organically.

So which Barrymore films do her daughters prefer over the rest? The best ones, obviously, as per People:

They love Ever After, 50 First Dates — and it’s weird, if anyone comes over and my movie’s playing I’m like, 'I swear to God, I’m not that [egotistical] jerk that’s like, here, kids, we’re watching [my films].'

For those of you who don't remember, Ever After was a film from 1998 where Barrymore played Cinderella and Angelica Huston played her stepmother and it was perfection because the theme of the film wasn't about a prince swooping in and saving her, it was about a woman who was strong-willed and knew herself. As for 50 First Dates, the 2004 classic, Barrymore played a woman with memory loss who forgot who she was every night and Adam Sandler plays the man who makes her fall in love with him fresh every day.

The Santa Clarita Diet actress explained to Good Morning America that she was pretty happy with her daughters watching these movies because she was proud of her work.

But they call it a 'mom movie' and they just enjoy watching it, and I’m proud of who I am and what I’ve done and especially the messages. I made them exactly for what young girls and boys feel. We’re all just trying to find love, be kind, and kick some ass here and there.

So what about their mom's first movie, E.T.? Barrymore admitted during her GMA interview that her oldest daughter Olive saw it but wasn't really into it. As for Santa Clarita Diet, where she plays a flesh-eating zombie? It seems Olive was visiting the set once and had a bit of a moment when she saw her mom get stabbed with a fork for the show, as per People:

Olive was there that day and she didn't like that. I was like, 'No, look! It's fake!'

Drew Barrymore has had one heck of a career and her daughters are in for a real treat as they watch her movies. I'm excited for them to see Never Been Kissed next... although I suppose that's one for the older gals like me.