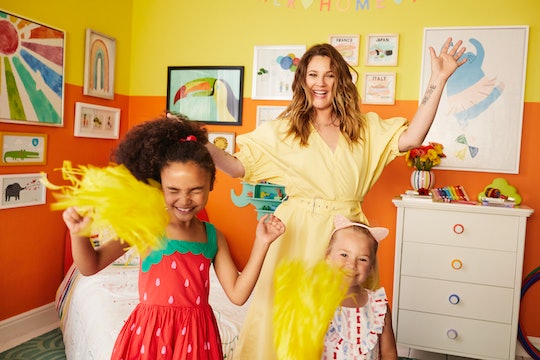 Drew Barrymore's New Home Line Is The World You Want Your Kids To Dream In — First Look!

“I am a child of the seventies and I love the rainbow!” Drew Barrymore tells Romper as she walks us through the cheerful and beautifully designed pieces of her newest endeavor, Drew Barrymore Flower Kids. “Now more than ever it’s actually symbolic of inclusiveness and open hearts and minds,” she adds. “The rainbow means something to all of us.”

Those “big, bright, bold” colors of the rainbow are everywhere in the line, launching August 1 in Walmart and the chain's "family of stores" (including Jet.com and Hayneedle.com). Barrymore’s daughters, Olive, 6, and Frankie, 5, inspire her “every day,” she says, but when it came to designing this line, it was really about creating what she wanted but couldn’t find. “When I was shopping for my kids it was always pastels,” she says. “It was neutrals!"

"I feel like I’m on the set of Rosemary’s Baby,” she remembers thinking of the options she encountered. "Why is everything so bassinet-y? And like, neutral gray curtains… it’s depressing! Like a room where an elderly woman is going to close our her life, not where a kid was going to burst onto the scene with the popping joy that should be a kid’s room!”

Barrymore's collection does indeed evoke a joyful world where kids can be free and have fun, but still find themselves with some calming order, which fits right into what she says is important to her when it comes to raising her own daughters. "Safety," is the first word she says when we ask what's important to her as a mom.

"Play, express yourself, have the best time, be carefree, but just… know there are men around so, not naked jumping in the pool right now," she says. "Appropriateness and boundaries and safety ... if they get those things instilled in them, then they can find their freedoms," she tells us. "I don’t want rigid children but I want them to have that true, gut intuition of hmm, something doesn’t feel right, or I shouldn’t do this over here, or it’s not the right time for that … that's my biggest thing."

She pauses. "And then manners!" she adds. "Manners are the most important thing to me. Safety and manners. Other than that, be kids! Get dirty! Play! Be silly!"

“You can create very specifically-themed rooms in this eclectic way, or you can totally mix it all together and it’s going to work," Barrymore says of the collection. "We wanted to make sure that you weren’t limited in a certain style.”

Featuring more than 100 items designed to coordinate with the Drew Barrymore Flower Home line launched earlier this year, items range in prices from $18 for kitchen and dining to $500 for bedroom furniture and décor. “Everything mixes and matches,” Barrymore says of the pieces she created with flexibility in mind (a rainbow headboard, for example, is removable for the time when your kid get a little older and says, "Mom, I’m cooler now.") and to appeal to kids (and parents) with a wide range of tastes.

"I think a lot about storage," Barrymore says, adding that the toy trunk has "gone away," but it can't be beat when it comes to the "functionality of getting your kids to clean up and embrace their responsibilities and chores. "There was a reason there was a toy trunk," she says. "Right now it’s all like bins and baskets and it’s all over the place!"

“I’m a girl who grew up as a tomboy, so I love when you can mix things and make it feel gender-neutral and androgynous,” Barrymore says. “There are ultimate ‘girl-girls’ and ‘boy-boys,’ but there are a bunch of us who feel that both styles are cool!”

Barrymore notes that all of the cords in Flower Kids are a herringbone cord "so they actually look pretty" when you see them. “Cords can ruin a look! Whenever you walk into a person’s house who’s super fancy, notice: all the cords are hidden!" she says. "But most of us don’t have the luxury of being able to do that, so I thought, if you have to see a cord, it should be cool.”

"I love this bed because I think a girl will feel so encompassed," Barrymore says of the Cottage House Bed ($229-$329) shown above. The bed also comes in a neutral light pine (below).

"You could put totally different bedding and make this an absolute boy’s bed," she says. "The thing that I love about it is they feel really safe when they’re in there."

“I’m going to push the trend of full beds for kids!" Barrymore declares. "The market is moving there."

Kids outgrow twin beds so quickly, she points out, noting that a full bed is more comfortable when you want to read to your kids at night (or usurp a child for a night and use their bed for guests). She laughs: "I’m so over twins; I never want to see twin again!" (She does note that Flower Kids offer twin beds, because a lot of people want them. "Sometimes there is limited space.")

"I’ve collected dishes for my kids since they were born," Barrymore shares with Romper, adding that she looks on Etsy and e-Bay to find "vintage table top" because she doesn't like the way most new, modern stuff looks: either "too branded commercially," or "babyish" ("drives me crazy!"), or "sooo ‘girly’ or so ‘boy.’" She says she designed the plates and cups she wants to use.

View the rest of the collection at Walmart.com and Hayneedle.com.