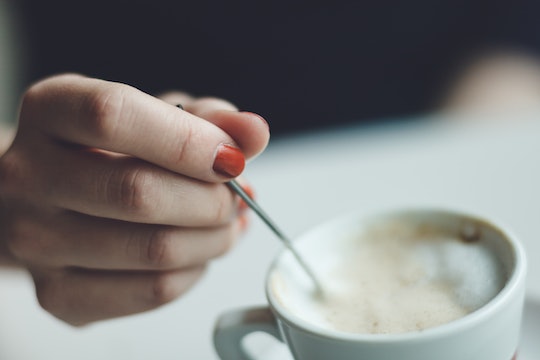 If you really enjoy your morning caffeine fix and perhaps have a little one on the way, a new study published in BMJ Evidence-Based Medicine warning against drinking coffee or consuming caffeine during pregnancy may put a damper on your day. But, as other experts have weighed in, don't panic just yet.

To reach these findings, lead researcher Jack James, a psychology professor at Reykjavik University in Iceland, analyzed data from 48 observational studies published over the past two decades on pregnant women and caffeine consumption and concluded that there was no safe level of caffeine that could be consumed during pregnancy.

The observational study found that eight out of nine studies on caffeine and miscarriage found links between the two, as well as a much higher risk of a stillbirth after 20 weeks gestation — five times higher. One of the studies used in the research also found a 28% increased risk of preterm birth, while three of six studies saw a significant increase in cases of childhood acute leukemia.

James concluded in his report that "current evidence does not support assumptions about safe levels of maternal caffeine consumption" and "the cumulative scientific evidence supports advice to pregnant women and women contemplating pregnancy to avoid caffeine."

While these findings are distressing, Dr. Christopher Zahn, vice president of practice activities for the American College of Obstetricians and Gynecologists (ACOG) shared a statement with CNN saying the organization sees no need to change its recommendation for moderate consumption of caffeine during pregnancy. "Our guidance remains that moderate caffeine consumption, less than 200 mg per day, does not appear to be a major contributing factor in miscarriage or preterm birth," Zahn told the news outlet.

The ACOG's recommendation for less than 200 mg of caffeine per day (around two cups of coffee, for example) is in line with the World Health Organization (WHO). The WHO recommends, "for pregnant women with high daily caffeine intake (more than 300 mg per day), lowering daily caffeine intake during pregnancy is recommended to reduce the risk of pregnancy loss and low birth weight neonates."

Dr Daghni Rajasingham from the Royal College of Obstetricians and Gynecologists also stood by its recommendations for moderate caffeine consumption during pregnancy. "(The) advice to limit caffeine intake to 200 milligrams (mg) per day — the equivalent to two cups of instant coffee — still stands," Rajasingham said in a statement, according to Science Media Centre. "This paper does not supersede all the other evidence that has found that a limited intake of caffeine is safe for the majority of pregnant women."

It's important to note that caffeine is also found in a variety of foods, like chocolate, ice cream, and pudding, according to the National Sleep Foundation.

James concluded in his report that it's "generally accepted that chronic exposure to chemicals during pregnancy is cause for concern" and "when the chemical of interest is caffeine, a near universally consumed habit-forming substance of no nutritional value, the need for caution is compelling."

Ultimately, women who are planning on getting pregnant or are already expecting should consult their health care provider if they have questions about the safety of caffeine during pregnancy.