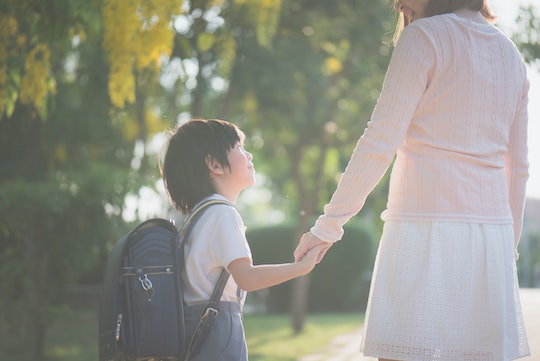 Oh, that very first day of school. It’s such a momentous, emotional event, eliciting a wild wave emotions. Or not so much a wave really, as a twisted swirl wherein one may burst into tears, dance with excitement, and/or wet their pants. And I’m not talking about the kids, here — I’m talking about the moms. There are just so many different thoughts and emotions buzzing through a mom's brain at that first school drop-off. Letting go of that chubby little hand and forcing yourself past the cubbies and out of the classroom, well, it can throw even the most stoic of mothers off-kilter.

I imagine if you ask most moms to describe the inside of their brains at that initial drop-off, they'd conjure a sort of David Lynchian-circus scape, complete with hysterically laughing trapeze artists and crying two-headed clowns smashing pies into their own faces. In other words, something totally bananas.

There's the fear and worry of leaving your child with strangers. There's the heartbreaking look on your kid's face when they realize you really, for real, are leaving her there. And if you've been a stay-at-home mom, you can throw into the emotional mix that now, for the first time in years, you have several hours to do whatever you want. And layered under that: panic over the ideal way to spend all of those hours. (A silent, leisurely trip to the grocery wherein no one demands Lucky Charms? Emailing friends you haven't talked to since your water broke? Staring at your chin in the mirror until you forget what the word "chin" means?)

I reached out to Dr. Tamar Chansky, a psychologist and the author of the Freeing Yourself From Anxiety series, for some insights on what moms should expect to feel that very first day. Say Chansky: "Every story I’ve ever heard of a first drop off — including with my two kids, many moons ago — ends with the parent crying in the car and calling a spouse or friend for support. Because let’s face it, it’s a big deal."

OK. Crying in the car is expected. Um. Great?

But Dr. Chansky says to take heart, as crying in the car is actually a thumbs up: "The reason why these crying in the car stories are good stories, is that it means that parents are holding it together for their kids at drop off... being warm, positive, supportive, and empathic to what is likely to be a big step for your child. Kids need to see that you believe that they can do this, that they are safe, that they are cared for."

But once you have left your child with a smile and a hug, Chansky encourages moms not to fight their emotions, but rather, to get it all out. "If you expect yourself to be emotional," Chansky explains, "you won’t have the double task of fighting the feelings on top of having the feelings." In other words, if you need to get a huge iced mocha and sit in the car and sob for awhile, then go for it. Remember, no one is going to present you with a blue ribbon for being "Toughest Mom Who Never Cries". Likewise, if you don't collapse into sobs, and instead want to shoot a confetti canon, well obviously that's totally fine and normal, too! The point is to just let yourself feel whatever it is you're feeling.

In terms of some practical steps for how to navigate the drop-off successfully, I spoke to Dr. Jen Trachtenberg, a pediatrician and parenting expert. Dr. Jen (as her patients call her) encourages parents to keep drop-off short, and recommends having a little goodbye ritual in place: "Like a hug, followed by a kiss and a 'see you later.' And then leave without continuing to engage, even if they seem upset."

She also seconds Dr. Chansky, saying that it's good to "keep your emotions in check" while with your child. "Don’t tell your child at drop-off how much you will miss them, or how hard it is without seeing them all day. Instead let them know they will have a good day, and so will you, and that you will see each other later."

Change is the only constant with this crazy parenting, gig, no? And change is so often confusing and hard and leaves one feeling a little loony. But Dr. Chansky compares crossing these milestones to being akin to getting into a cold swimming pool: "It’s not going to feel good at first, but you adjust. Be kind to yourself. Remind yourself that you are being a good parent to trust in your child to feel some discomfort and ride it out."

So just ride that crazy wave/bonkers swirl of emotions, moms. Who knows, by the end of September you may be just like Susannah B., dumping her kid off then making some plans for Vegas.

More Like This
21 A+ Christmas Gifts For Teachers
Festive Mommy & Me Holiday Nail Ideas To Try
If Your Kids Love Their Elf, You Don't *Have* To Put Him Away On Christmas
Spread Some Christmas Cheer In Your Child’s Bedroom