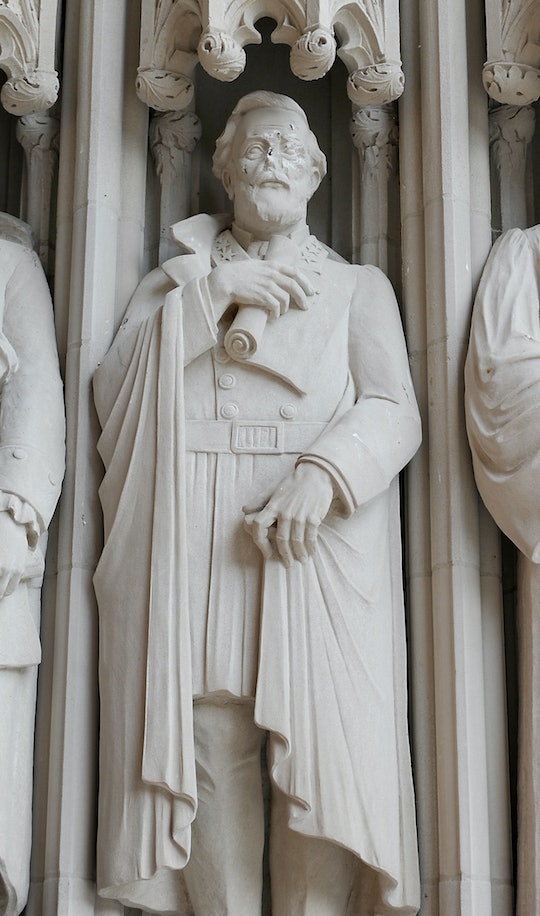 Duke University is a southern institution. Founded in 1838, the Durham, North Carolina school has a complicated history, particularly when it comes to race relations in the south. But it seems as though the university is making positive strides in the wake of the Charlottesville rallies from a week ago. Duke University took down a Confederate statue of Gen. Robert E. Lee that stood in Duke Chapel after it was vandalized, and it's an important step in the right direction.

On Thursday morning, school officials reportedly discovered the face of Robert E. Lee's limestone statue had been vandalized. According to a report by The Hill, University President Vincent Price made the decision to take down the statue, explaining in an emailed statement to faculty and students:

Wednesday night’s act of vandalism made clear that the turmoil and turbulence of recent months do not stop at Duke’s gates. We have a responsibility to come together as a community to determine how we can respond to this unrest in a way that demonstrates our firm commitment to justice, not discrimination; to civil protest, not violence; to authentic dialogue, not rhetoric; and to empathy, not hatred.

While the statue was removed from Duke Chapel, Price explained it will remain on campus as a means to "study Duke’s complex past and take part in a more inclusive future."

Duke has struggled with racial controversy in recent years; in April 2015, a student hung a noose from a tree close to Duke Chapel, while later in the year a poster advertising a visit from #BlackLivesMatter founder Patrisse Cullors was defaced with a racial slur, according to The Duke Chronicle.

The city of Durham, where Duke is located, has itself become a hotbed of furious debate over the removal of Confederate statues. On Monday, protesters tore down a bronze statue of a Confederate soldier in front of a government building. Eight people were arrested, while hundreds marched in a peaceful protest against racism.

Despite these arrests, North Carolina Gov. Roy Cooper has said he wants all monuments honoring Confederates to be taken down from public areas. According to ABC News, Cooper said in a statement earlier this week:

We cannot continue to glorify a war against the United States of America fought in the defense of slavery. These monuments should come down.

Not only has he met opposition from white nationalist groups who want to preserve the Civil War monuments, but there is a 2015 law protecting the removal of statues from public property without legislative approval.

Fortunately, Duke University is privately owned and able to take matters into their own hands. As Price explained in a statement on Duke Today:

I took this course of action to protect Duke Chapel, to ensure the vital safety of students and community members who worship there, and above all to express the deep and abiding values of our university.

There are monuments all over the country worth saving, worth preserving, and worth honoring. The statues are clearly not among them.