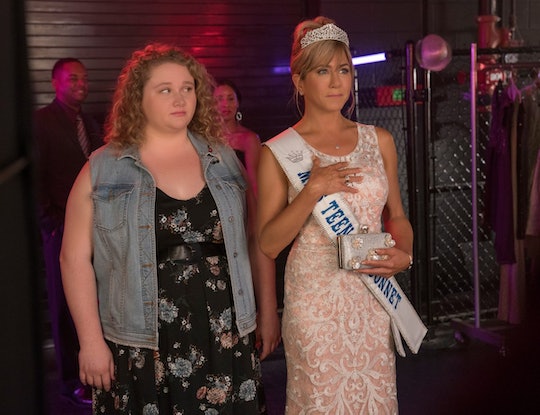 My 3-week-old son was laying on my chest when I sleepily scanned through my Netflix options on a late Tuesday — or was it Wednesday? — night. After a few haphazard moments, I landed on the Netflix original movie Dumplin', based on the 2015 young-adult novel by Julie Murphy — a movie concerning, at its core, hurt and love in a mother-daughter relationship. My choice was masochistic in nature, to be sure, but as any new mom can tell you, emotionally terrorizing yourself is par for the sleep-deprived course. As I held my newborn, I prepared to ugly cry my way through the next hour and 50 minutes of my postpartum life — but what I took from it wasn't the simple narrative of the fat-phobic mom I've seen written about. There was something more complex.

The film follows Willowdean Dickson (Danielle Macdonald) as she considers a relationship with a boy from work, pushes back against bullies, and makes new friends during an unlikely act of rebellion. But it's the feud with her mom, Rosie Dickson (Jennifer Aniston), a former beauty queen turned beauty pageant director, that becomes a central part of Willowdean's story. Holding onto the memories of her aunt, who Willdowdean ("Will" to her friends; "Dumplin'" to her mother) considers her pseudo-mom and who recently passed away, Willowdean finds herself at war with everything her mom stands for: conventionally attractive and often unattainable beauty standards; living up to other people's gendered expectations; and ultimately caring what other people think of you. In an act of defiance and an attempt to feel closer to her aunt, Willowdean enters the beauty pageant her mom won as a teen and now directs, putting the two on a collision course.

Rosie represents the one mistake so many of us moms make: being so afraid for your child that you decide, before they even try something new or experience something different, what they can and cannot do.

Much has already been written about Willdowdean and Rosie's relationship, the majority of which paints Rosie as a fat-phobic has-been hellbent on making her daughter into something she's not: a thin beauty queen who can carry on her mom's dying legacy. It's easy to assume Rosie wants to live vicariously through Willowdean and, when she can't, holds it against her daughter. Will assumes her mother hates her body and, as a result, Willowdean herself, telling her mom in a particularly heart-wrenching scene, "You'll never come out and say it, but I know you can't stand that your daughter looks like this."

The tension between Rosie and her daughter is palpable and, with my newborn son on my chest, almost inconceivable. Rosie doesn't understand her daughter and, what's worse, doesn't seem to want to try to rectify the divide between them. She is self-centered, she is unable to let go of a beauty queen title she held as a teen, and she is emotionally distant in what seems to be an act of self-preservation. She is a foil against which Will discovers self-love.

But contrary to the numerous think-pieces concluding Rosie hates or is ashamed of her daughter and her body, I believe, Rosie represents the one mistake so many of us moms make: being so afraid for your child that you decide, before they even try something new or experience something different, what they can and cannot do.

In our futile attempt to protect our babies from what we fear ourselves, we end up hurting them in ways both deep and potentially ever-lasting.

As parents, it's so easy to love our children to the point of damage.

Rosie shrunk herself, in body and in personality, and as a parent wants to afford her daughter the same type of misguided protection.

After Willowdean tells Rosie that she knows she doesn't "fit in her world," Rosie tells Willowdean, "I just want you to have opportunities, all right? It's harder for big girls."

This emotional confession gives us a glimpse into her inner workings. Rosie was fat as a child, but, according to Willowdean, lost the weight before freshman year of high school. Towards the end of the movie Rosie finds an unfinished beauty pageant application partially filled out by her sister and, in no uncertain terms, is baffled. "I don't understand this. I mean, Lucy was the most confident. Her confidence scared me." In order to protect herself from the bullying and mistreatment of others Rosie shrunk herself, in body and in personality, and as a parent wants to afford her daughter the same type of misguided protection. As someone who flourished in the beauty pageant world, Rosie knows what is said to and about fat girls, and doesn't want her daughter to experience the same hatred and vitriol.

Unfortunately, Rosie's innate desire to protect her daughter ends up alienating her, and Willowdean can't help but internalize the idea that girls like her can only attract certain types of guys, only have certain types of friends, and can only accomplish a very specific set of things. When discussing a potential love interest, for example, Willowdean tells her best friend, Ellen Dryer (Odeya Rush), that leading-man Bo (Luke Benward), "Boys like Bo don't date girls like me. That's a fact."

This same need keeps Rosie from discussing her late sister with her daughter, and at a time when Will needs to talk about the aunt she misses and deeply mourns. Rosie feels the pains of loss when she thinks about her sister; pains she mistakenly believes she can shield her daughter from by ignoring that devastating loss entirely.

Willowdean is made to feel less than, lost, and alone... and by the very person who doesn't want her to feel any pain at all.

Our children deserve to experience the full complexities of life, and that includes disappointment, pain, and heartbreak.

Rosie isn't the only character guilty of loving her child to the point of pain. Millie Michalchuk (Maddie Baillio), a fat classmate of Willowdean's, secretly enters the beauty pageant against her mother's (Kathy Najimy) wishes. Millie's mom forbids her from entering and even though Millie has wanted to do the pageant since she was 8. When Millie's mom finds out and confronts her, incensed that she was lied to, Millie tells her mom, "You were wrong for saying no when I asked. I get that you were just trying to protect me but sometimes I need you to support me." As Millie's mom tries to take her home, Willowdean comes to Millie's defense, saying: "Millie has to compete. She's worked so hard for this and she really deserves it. She's not fragile. She's got this thick skin you wouldn't even expect."

Millie continues to compete in the pageant, with her mom's support, and places second.

That is what Willowdean — what all children — need: support. Not a parent making decisions for them in the name of parental protection; not a mother preemptively excluding her child for fear inclusion will mean bullying, or worse; not a parent who decides what their child can and cannot do because failure can be excruciating. Our children deserve to experience the full complexities of life, and that includes disappointment, pain, and heartbreak. Shielding them from these necessary experiences sends a message to our children that we don't believe they're strong enough, capable enough, or worthy enough of living their lives of fully realized human beings.

It takes Rosie the entirety of the movie to realize this lesson. It's a lesson I hope people don't miss by identifying with Willowdean and demonizing Rosie; a lesson that, as a mother of two, I know I will have to learn over and over and over again, too.

Every parent is quick to profess how far they'll go to protect their precious offspring. But when "anything" manifests itself into subtle shaming, scorning, and exclusion, the idea that us parents should protect our children from all pain at all cost isn't the romantic notion we tend to hold it up as. Instead, it's damaging. And in an attempt to protect Willowdean from the cruelty of others and her mother's own personal fears, Rosie ends up making her daughter feel bad about herself.

As someone in imperfect recovery from an eating disorder, I don't ever want to make my sons feel like Willowdean. As a mother, I don't want to protect my children to the point that I end up causing them pain. But it's easy to make the same mistakes Rosie makes throughout the film, especially when us parents — and particularly us moms — feel an immense amount of pressure to constantly watch over our children.

Perhaps our collective rush to hate Rosie is a subtle manifestation of our greatest fears as parents. Perhaps, like Rosie alienates Willowdean, we are alienating her because we're afraid of what she has become... and afraid that we will end up making the same mistakes she made.

It's easy to write her character off, but as Willowdean says in the beginning of the film, "It's funny how you can look at the same things over and over again a certain way, until something unexpected suddenly changes how you see everything."

Filled with love, with my newborn on my chest three weeks after I brought him into this world, I think that as parents we need to acknowledge that we are both Willowdean and Rosie.

In the end it's not enough to love our children. Loving them is easy. It's supporting them, no matter what, that is a true testament of our devotion to who they are and who they will become.

Related: 'Dumplin'' Is A Reminder That Our Daughters Aren’t Our Trophies

More Like This
Moms, Just Eat The Fruit Dammit
Festive Mommy & Me Holiday Nail Ideas To Try
101 Advent Calendar Activities, From Books To Read To Cookies To Bake
The Best Black Friday 2022 Deals For Moms