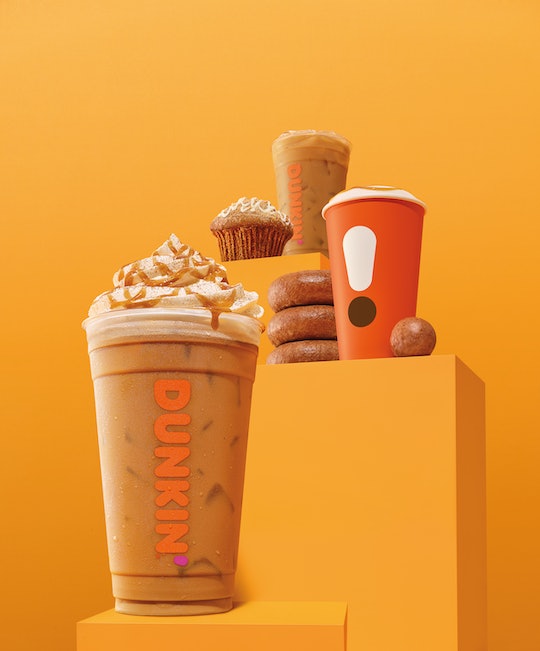 Fall is on the horizon, folks. If I don my Ugg boots and squint as hard as I can, I can almost make out pumpkin-flavored everything looming in the not-so-distant future on my calendar. I have been craving a pumpkin latte for a while now, and luckily the fall flavors we all know and love are set to return to many eateries and coffee shops in the coming months, but exactly when will the pumpkin menu be back at Dunkin?

Honestly, it's sooner than you probably expected. While the full array of autumn delights will return to all Dunkin' stores Aug. 21, fall fans at eight select restaurants will get their first taste of fall on Aug. 14. That coincides nicely with school starting for some people and let me tell you, I for one am not mad at all. Can you just imagine rolling up to Dunkin' after drop-off to enjoy a pumpkin-flavored cold brew in the sweltering August heat? Be still my caffeine-fueled heart.

On Aug. 14, Dunkin' will rebrand eight stores to Pumpkin' in honor of fall's signature flavor. Rebranded exterior signage and festive decor will greet guests as part of this special fall preview event. The first 250 fall fanatics at these eight lucky locations will receive a free small hot or iced Pumpkin Flavored Coffee. Guests can also snag a new pumpkin-scented MUNCHKINS lip balm for free while supplies last. Drinking a pumpkin coffee and then slathering my lips with pumpkin lip balm sounds like an amazing way to start a not-quite-yet-fall day.

Unfortunately, I live in Houston, which starts with an H. Why does that matter, you ask? Well, the eight stores that will be blessed with the Dunkin' fall flavors (plus lip balm!) earlier than the rest are located in cities that start with the letters that spell out the word P-U-M-P-K-I-N-'. If you happen to live in or near a city that may make the cut, keep an eye on the Dunkin' Instagram page where the fall flavor powers that be are set to release more clues about where the pop-up Pumpkin' rebrands will occur.

If you are not able to catch the fall preview day on Aug. 14, the entire fall-flavored menu will be back in full swing on Aug. 21 in Dunkin' stores nationwide. In addition to traditional favorites for the pumpkin-obsessed like Pumpkin Flavored Coffee, the Pumpkin Donut, and the Pumpkin Muffin, Dunkin' has two new fall flavors this year that are sure to make you want to dive headfirst into a pile of freshly raked red and yellow leaves. The Cinnamon Sugar Pumpkin Signature Latte combines classic pumpkin with warm cinnamon flavor in an espresso drink topped with whipped cream, caramel drizzle, and a sprinkling of cinnamon sugar topping. You can enjoy your fall-in-a-cup with Dunkin's new Apple Cider Donut or Apple Cider MUNCHKINS donut holes, featuring apple cake tossed in cinnamon sugar.

Because heading to Dunkin' every single morning (and again in the afternoon, because let's be honest, you need coffee) may not be in the cards for every pumpkin lover, Dunkin's K-Cup pods and packaged coffee in their signature pumpkin flavor will be available starting Aug. 21 as well. You can pick up some autumn goodness to brew in your own home in participating Dunkin' stores or your local grocery store for those days when you just can't get enough of your favorite fall beverage.

More Like This
10 Thanksgiving Desserts That Aren’t Pumpkin Pie
HelloFresh Is Releasing Spaghetti Meal Kits Inspired By Buddy The Elf
Store-Bought Meals Didn’t Ruin Our Holidays. They Made Them.
20 Holiday Gifts For Neighbors They’re Sure To Love